Genghis Han killed so many people, that it was actually good for the environment, new study claims

Genghis Khan might have been the greenest invader of all time – his bloody conquests killed so many people, that in their path, huge swathes of cultivated land returned to forest, eliminating a huge amount of carbon from the atmosphere. 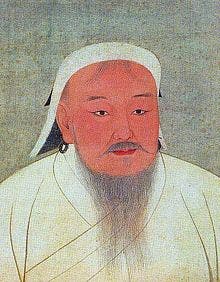 When some 600 years after your lifetime, people don’t refer to you by your real name, but by a name meaning “Supreme Ruler” (which is what “Genghis Khan” means) – you’ve done some things in life. In just a lifetime, he created the biggest empire that ever was – larger than the Romans did in centuries. As you might guess, he didn’t do that by peaceful negotiation and smooth diplomacy – Genghis Khan was a conqueror by force. The wars led in his name killed some 40 million people (about 10% of the world’s population at the time)! But, as a new study showed, these bloody conquests helped the environment – removing nearly 700 million tons of carbon from the atmosphere.

While the Mongol ruler wasn’t even thinking about it, he was causing the first man-made global cooling.

‘It’s a common misconception that the human impact on climate began with the large-scale burning of coal and oil in the industrial era,’ said Julia Pongratz, who headed the research by the Carnegie Institution’s Department of Global Ecology. ‘Actually, humans started to influence the environment thousands of years ago by changing the vegetation cover of the Earth’s landscapes when we cleared forests for agriculture,’ she explained.

Now, before you get into some very wrong conclusion – this is in no way connected to current climate change, and no one is suggesting fighting climate change through war and conquest – that’s nonsense. What this study does do is provide insight into how long events must be to create durable shifts in the planet’s climate.

‘We found that during the short events such as the Black Death and the Ming Dynasty collapse, the forest re-growth wasn’t enough to overcome the emissions from decaying material in the soil,’ explained Pongratz. ‘But during the longer-lasting ones like the Mongol invasion… there was enough time for the forests to re-grow and absorb significant amounts of carbon.’

It also reveals new information about the carbon cycle, and how we are affecting it, potentially yielding valuable information for policy makers.

‘Based on the knowledge we have gained from the past, we are now in a position to make land-use decisions that will diminish our impact on climate and the carbon cycle,’ she concluded.