Here we go: once again, Colorado’s fracking boom raised fears that something dangerous will be leaked in the water, and what do you know? Carcinogenic benzene it is!

A plant for fracked natural gas processor Williams Energy, near Parachute, Colo., spilled an estimated 241 barrels of mixed natural gas liquid into the ground, some of which eventually washed as benzene into Parachute Creek. 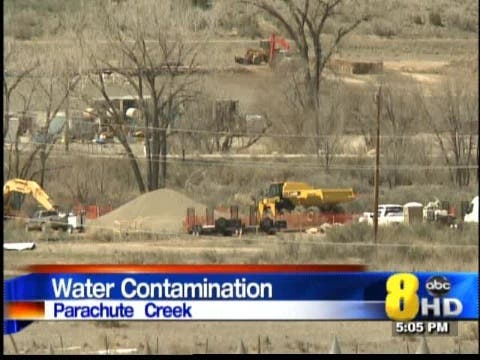 Two months have passed since the spill was discovered, and one can only wonder why the energy company has been put in charge of the clean-up (when in 60 days, they haven’t done anything), and why the state hasn’t issued any fines.

“I’d like to say they’ve cleaned it up,” said [downstream rancher Sidney] Lindauer on Wednesday, referring to the combined efforts of Williams Midstream and the Colorado Department of Public Health and Environment (CDPHE).

But as he says, and as it’s clear for everybody, leaving the clean-up solely in the hands of the company which made the mess is not a good idea.

“We need an independent agency that isn’t associated with the industry, or any industry, to monitor that creek,” he said on Wednesday, lamenting that “they [the CDPHE] pretty much leave it up to Williams.”

He said that aside from the benzene in the water, unexplained layers of dingy, brownish foam showed up on the creek’s surface in recent weeks.

“Sometimes that creek is cloudy and off color, so you know something’s going on,” he concluded, explaining that he gets water for his horses and his pastures from the creek, though his domestic drinking water is from the Town of Parachute’s water system.

So no clean-up, no fines, nothing. Why? Here’s why: the consent order won’t have a fine associated with it “as the release was not due to negligence but to accidental equipment failure,” officials said.

Oh, so it was an accident that leaked benzen into the water. Sorry for asking, fracking company – carry on.

Source and more information on Grist.