Stormy weather has an unusual upside if you happen to live on Australia's eastern coasts: giant waves of sea foam.

by Alexandru Micu
in Environment, News, Science, Videos
A A

Stormy weather has an unusual upside if you happen to live on Australia’s eastern coasts: giant waves of sea foam. A video taken a few days after a powerful storm hit Froggy Beach shows a man enjoying this rare phenomenon.

Big storms or cyclones can sometimes cause the sea to form thick layers of foam according to NOAA, similarly to what you’re used to see in a bathtub rather than in the open ocean.

The foaming is caused by winds and waves stirring the water so proteins, dead algae, and other tiny particles bind together to form longer chemical chains. Grey Leyson captured a stunning video of this phenomenon on Saturday at Froggy’s Beach near Coolangatta, Australia. 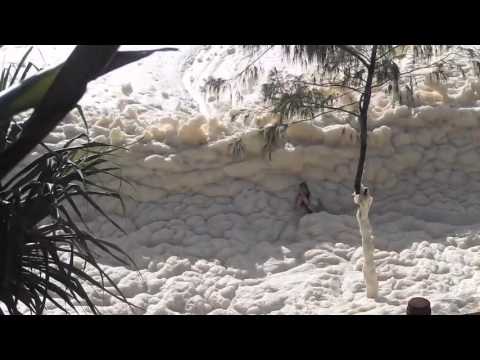 While the sea looks inviting enough like this, locals tell that people usually stay away from the ocean after storms as sea snakes have a habit of washing up on the shore.

“The biggest hazard I suppose is sea snakes, there are a lot of sea snakes that get washed in from out further,” Leyson told the Brisbane Times. “You are very unlikely to get bitten by one, but if you do, they are pretty venomous.”

This particular storm brought bigger dangers than a few sea snakes, however. It hit parts of New South Wales with a fury, causing floods and bringing very destructive surfs of over 5 meters (17 feet) on average, reaching up to 12 meters (40 feet) in height.

Thousands of people were forced to evacuate their homes and seek shelter elsewhere as the storm destroyed beachfront properties and brought heavy rains threatening the area around Narrabeen Lakes in Sydney with flooding. Four people died, and three people have been reported missing during the storm, according to the Australian Broadcasting Company.

Conditions over New South Wales and Tasmania improved by Tuesday as the storm passed.