Study aims to lay ground for the first ‘green highway’

by Tibi Puiu
in Environmental Issues, Renewable Energy
Reading Time: 2 mins read
A A
Share on FacebookShare on TwitterSubmit to Reddit 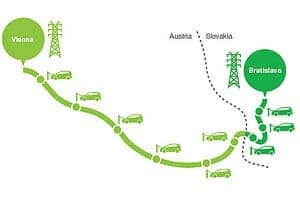 IBM has teamed up with Zapadoslovenska energetika (ZSE), the biggest electric company in Slovakia, for a feasibility study which aims to prepare Bratislava, the nation’s capitol, for plug-in electric vehicles. With this in mind, the companies will look at the best way to develop a  “green highway” between Bratislava and the neighboring Austrian city of Vienna, which is about 49 miles away.

Electric vehicles are being hailed everywhere as the future of automobile transportation, but they’re still in their infancy, and a yet highly limiting infrastructure casts a shroud of unpopularity over them. At the turn of the XXth century when the automobile boom rose, infrastructure grew along with it to meet the demand for more roads and gas stations. For EVs, infrastructure comes down to a simple, yet complicated at the same time, fact – electric plug-in stations, dispersed in such a way that they cater to the vehicles’ rather poor autonomy. However, companies today don’t have the economic luxury of simply building serving stations on the go, and this is where this partnership comes in.

The two companies will thus work on a project which will tackle all the issues which might arise with building public charging  network between Bratislava and Vienna that can support a new generation of electric cars without stressing the existing power grid.

The IBM-ZSE project “tackles all of these issues,” Bartels continued. “It has the potential to introduce a modern, convenient and more intelligent way for consumers to commute, which in turn may encourage more to make the shift to an electric vehicle, while reducing stress on the energy grid.”

Hopefully, if the virtual outline of the serving network is deemed accessible, from more than one point of view, actual implementation might commence, and along with it, hopefully, other important routes in Europe and the rest of the world.