by Tibi Puiu
in Videos
Reading Time: 2 mins read
A A 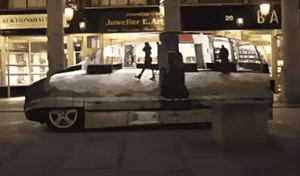 Worldwide, motor vehicles currently emit well over 900 million metric tons of CO2 each year, amounting to more than 15 percent of global fossil fuel CO2 releases. With this in mind, major automobile manufacturers have been investing massively in developing more fuel efficient   power systems and lower emissions for the past few decades. We’ve seen a number of exciting concepts and prototypes rolled out along the years with absolutely zero greenhouse emissions, mostly running on hydrogen fuel or electric engines. However, we’re a long way from highways roamed by “green” cars, but steps, albeit very small, are made towards this direction steadily, such that such automobiles become reliable and dispose of the necessary fueling infrastructure to one day rival conventional cars.

Mercedes has always made efforts in this direction, and the latest to come off their green platform is the Mercedes F-Cell Hydrogen. A  fuel cell powered vehicle, which boasts a 240 miles driving rage on a single tank of hydrogen and produces no emissions other than water vapor. Because of this, the company states that the car is  “invisible” to the environment – an idea which was masterfully turned in a brilliant engagement marketing campaign. Check out the ad in the youtube video below.

The company had an alternative solution to cloaking, and strapped the F-Cell car with LEDs all around one side of it, while on the other side a camera was installed. As the camera captured the view from the right side, it was projected through the LED display on the other side, making it blend with its surroundings, although still fairly noticeable, but maybe it’s exactly this that makes the ad so charming.