With the football (soccer) World Cup, extra protection for the armadillo? 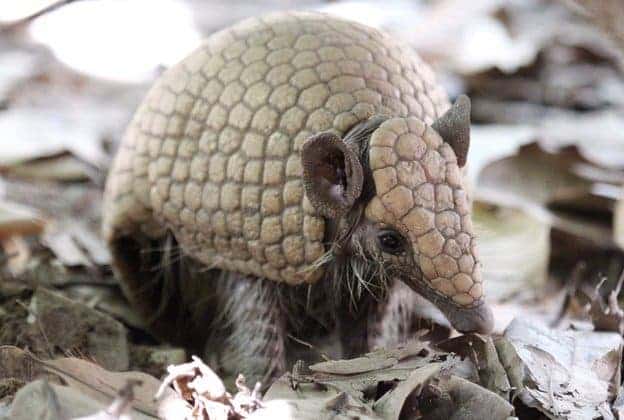 With the football (soccer) World Cup in sight, many are worried about the negative environmental impact the competition will have, in a country already torn apart by poverty. But some are trying to look at this as an opportunity to help preserve biodiversity, especially the armadillo, the endemic species which inspired this year’s World Cup mascot.

Known locally as the “tatu bola” or “armadillo ball”, this armadillo is an emblematic animal for South America; it protects itself by rolling its flexible armour into an almost perfect and impenetrable ball when threatened. Interestingly enough, it inspired the mascot for the World Cup. I really love its name too: Fuleco. Fuleco is a combination (in Portuguese) of Football (“Futebol”) and ecology (“ecologia”); it also sounds like “Full eco”, so the environmental message is clear.

“As a member of a vulnerable species, the official mascot can play a key role in driving environmental awareness”, said FIFA, the International Federation of Association Football.

The message is there, but did FIFA actually do anything? The short answer is – no. They claimed to raise awareness and send an environmental message, but a mascot and a mascot name, as cute and well thought as they may be, do little in effect. In an article published last month in Biotropica, a group of Brazilian scientists wrote:

“As football fans and conservationists, we challenge Fifa and Brazil to set an ambitious mark: at least 1000 hectares of Caatinga declared as protected area for each goal scored during the 2014 World Cup”.

With an average of 170 goals scored during each cup, that would translate to 170.000 hectares of armadillo habitat protected, which would do wonders for the animal. The armadillo was declared endangered two decades ago, but the situation is more desperate than ever. The Caatinga dry forest once covered nearly 845,000 square km or about 11% of the Brazilian territory, but now it covers less than half of that, mostly because of deforestation for wood.

Rodrigo Castro coordinates the Brazilian three-banded armadillo project at the Caatinga Association and he’s a firm defender of the species:

“From the 11 armadillo species found in Brazil, only two have the ability to roll into a ball: the one that inspired the mascot, which is endemic to Brazil, and another species, the Southern three-banded armadillo, Tolypeutes matacus, that can be found not only in southwestern Brazil but also in Argentina, Paraguay and Bolivia”.

“This unique defensive strategy helped the three-banded armadillo survive 140 million years of evolution but it makes it vulnerable to human beings, because when it rolls into a ball it remains still”.

The message is pretty clear: if we don’t do anything (and fast), the armadillo may very well go extinct soon. This World Cup seems like the perfect chance to start powering up some efforts, but FIFA doesn’t seem truly interested in that; they don’t seem interested to reinvest their winnings into biodiversity conservation.

Some 20 million Brazilians live in the Caatinga area, and they are some of the poorest in the entire country. But even in these remote areas, the Fuleco brand is already well known.

So it would be the perfect time to take action, while the little armadillo has the spotlights focused on him. Leaving this World Cup passing by without taking action would be missing a huge chance. But FIFA hasn’t responded yet, and they don’t seem interested in the matter. Hopefully this will chance, especially with the Summer Olympics also heading for Brazil in 2016.

“The Brazilian three-banded armadillo gave life to Fuleco, but Fuleco has achieved very little for the three-banded armadillo. We hope that millions of people watching the matches will become aware of the plight of this animal and that the World Cup will have an impact on the fate of the species,” Rodrigo Castro told the BBC.

“The outcome depends to a great extent on FIFA. We still hope it will understand this is the first ever World Cup that could leave a lasting legacy for biodiversity, helping to save the Brazilian three-banded armadillo from extinction”.