A team led by scientists at University of British Columbia highlights the impacts of climate change on the world's oceans and marine life. Two scenarios were analyzed. One followed the changes that would arise if the world banded together to significantly curb greenhouse gas emissions; the other summarized impacts 100 years from now if we'd go on with business as usual. The report outlines the consequences under each scenario and found immediate action is required if we're to avert at a catastrophic outcome, particularly regarding the planet's oceans.

by Tibi Puiu
in Climate, News, World Problems
Reading Time: 4 mins read
A A
Share on FacebookShare on TwitterSubmit to Reddit

A team led by scientists at University of British Columbia highlighted the impacts of climate change on the world’s oceans and marine life. Two scenarios were analyzed. One followed the changes that would arise if the world banded together to significantly curb greenhouse gas emissions; the other summarized impacts 100 years from now if we’d go on with business as usual. The report outlines the consequences under each scenario and found immediate action is required if we’re to avert at a catastrophic outcome, particularly regarding the planet’s oceans.

The seas and oceans of the world act like a carbon sink. Since industrial times, the oceans have absorbed 90% of the excess heat emitted in the atmosphere and about 28% of the carbon pollution. Sea surface temperature increased over the 20th century and continues to rise. From 1901 through 2014, temperatures rose at an average rate of 0.13°F per decade. Sea surface temperatures have been higher during the past three decades than at any other time since reliable observations began in 1880.

“There is a strong relationship between CO2 in the atmosphere and CO2 in the ocean and the consequence of that is the ocean becomes more acidic,” said co-author William Cheung, a marine biologist.

With this in mind, it becomes clear that ocean ecosystems, where thousands of marine species are intertwined in a complicated dependency web, are particularly vulnerable – more so than terrestrial species. Besides increased temperatures, global warming also causes the oceans to become more acidic.

The first ocean life impact scenario assumed the the changes required to limit temperature rise at  2°C above pre-industrial temperatures, as advised by the Intergovernmental Panel on Climate Change last year.  In the second scenario, no further efforts are assumed and emissions are modeled based on current rising trends. During this scenario, average global temperatures rise by 5°C by the end of the century. Between now and 2100, the latter scenario involves 6 times more global carbon pollution emitted by humans, the authors conclude in the paper published in Science.

Here’s what the report found: the 5°C warming scenario would cause oceans to rise 30 cm higher, oxygen content nearly 2% lower, ocean acidity 70% higher, and sea surface temperatures about 2°C hotter than in 2°C warming scenario. Once this dangerous threshold is reached, there’s little we can do to turn back. The change is irreversible and the carbon traps heat for centuries before breaking down.

“In summary, the carbon that we emit today will change the Earth System irreversibly for many generations to come. The ocean’s content of carbon, acidity, and heat as well as sea level will continue to increase long after atmospheric CO2 is stabilized. These irreversible changes increase with increasing emissions, underscoring the urgency of near-term carbon emission reduction if ocean warming and acidification are to be kept at moderate levels.” 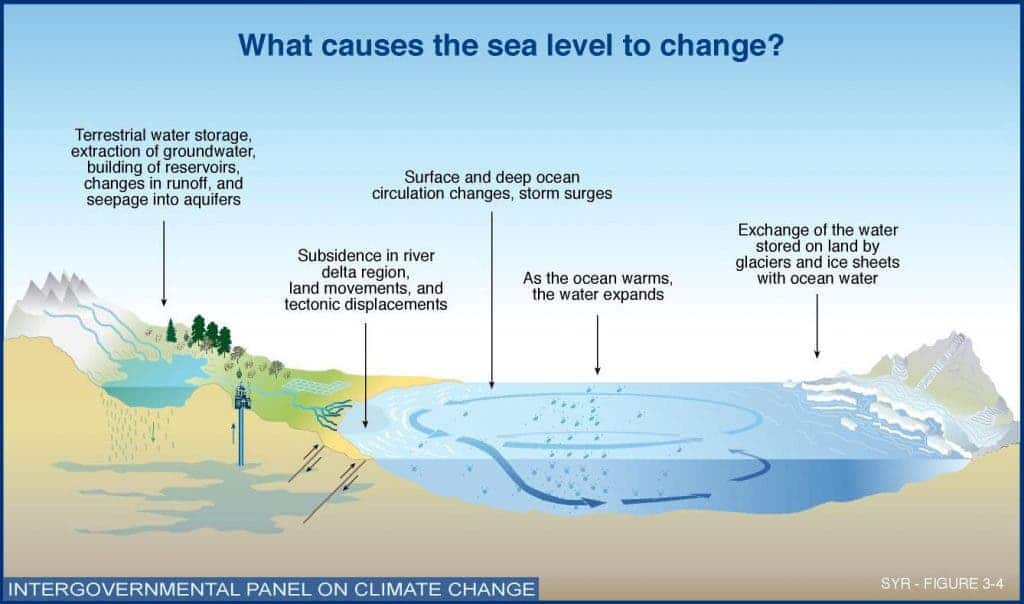 One of the most vulnerable ecosystems in the face of this major global shift are coral reefs. These comprise the habitat for around a quarter of the species in the oceans, and are important source of revenue from tourism for a lot of countries in the world. The acidic waters bleach the corals and kill them, while the higher temperatures might cause biotic diseases to spread.

Rising waters could threaten 0.2 to 4.6% of the global population with annual severe floods. The economic damage is calculated to sit between 0.3 to 9.3% of global GDP.

The rising temperatures and ocean acidification is also changing the global migration pattern of fish. Economically, this could bear significant disadvantages to the fishing sector.

“Recent studies strongly reiterate that many species—including various invertebrates, commercially important fish species and marine mammals—are undergoing phenological and geographical shifts of up to 400 km per decade as a result of warming,” the authors write.

“We can already see that fish in equatorial waters are moving toward the poles seeking cooler water,” said Cheung.

The report comes as the United Nations prepares to host a global summit on carbon dioxide emissions in Paris later this year.

“Until now the oceans have not been a big part of this discussion,” said Cheung.