Carbon emissions rate unprecedented in the past 66 million years

About 55.8 million years, the rate of carbon emissions grew abruptly, leading to a period of massive warming. But today's rate of emissions is ten times higher.

by Mihai Andrei
in Climate, Geology, News
Reading Time: 3 mins read
A A
Share on FacebookShare on TwitterSubmit to Reddit

About 55.8 million years ago, the rate of carbon emissions grew abruptly, leading to a period of massive warming. But today’s rate of emissions is ten times higher.

Today’s global warming is often compared to similar geological phases, although the comparison really isn’t fair. Geological shifts happen in millions of years, whereas today’s changes take place on the scale of decades. But even this comparison, as unfair as it is, still doesn’t stand. We’re emitting carbon dioxide at the fastest rate since the Paleozoic (at the least).

Richard Zeebe at the University of Hawaii at Manoa and colleagues compared the timing of climate change with the timing of carbon emissions as recorded by marine sediments, and found that they occurred at essentially the same time. They compared today’s situation to an event called the Palaeocene–Eocene Thermal Maximum (PETM), which took place 55.8 million years ago.

The Paleocene–Eocene Thermal Maximum (PETM) was  a period of massive carbon injection has been estimated to have lasted some 0.2 million years. During this period, global temperatures increased by 5–8 °C. Stratigraphic sections containing the PETM reveal numerous other changes and extinctions. Fossil records for many organisms show major turnovers, especially for marine creatures. But as massive as those changes were, today’s changes are even more striking. 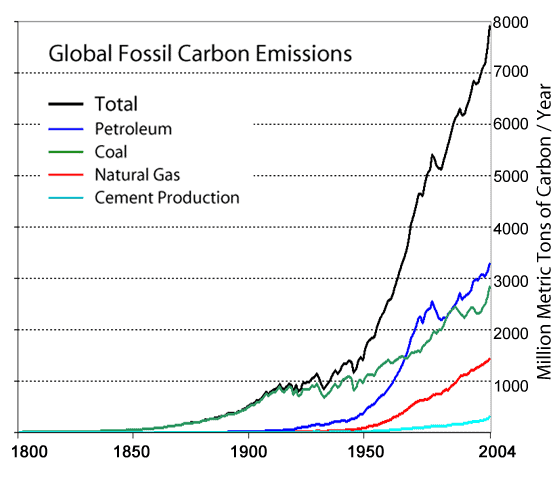 “Given that the current rate of carbon release is unprecedented throughout the Cenozoic, we have effectively entered an era of a no-analogue state, which represents a fundamental challenge to constraining future climate projections,” the study writes.

In an accompanying News & Views article, Peter Stassen, one of the researchers who also studies paleoclimate writes:

“If PETM emissions occurred over a slower timescale as proposed by Zeebe et al., pelagic marine ecosystems may have had sufficient time to adapt to environmental changes through migration or evolution. It therefore remains possible that the current rates of change might exceed the adaptive capacity of modern marine ecosystems and their constituents.”

In other words, climate change may be happening too fast for ecosystems to cope with it, and if this is the case then we’re headed for massive extinctions. During the PETM, only the deep-sea biosphere was rapidly disturbed, culminating in the sudden extinction of foraminifera living on the ocean floor. This time, the situation could be much more dire.

Climate change is driven by manking emitting massive quantities of greenhouse gases in the atmosphere, especially carbon dioxide. This is already a scientific fact, with an undeniable level of confidence.