Not the kind of record we want.

In less than a century, humans have managed the ignoble feat of raising atmospheric CO2 levels by more than 100 parts per million (ppm). Like every year, weather stations are measuring new record levels of CO2 in the atmosphere and according to data from the Mauna Loa Observatory in Hawaii, the concentration of CO2 in the atmosphere is now over 415 ppm, which is higher than at any point during the existence of our lineage.

This is the first time in human history our planet's atmosphere has had more than 415ppm CO2.

Not just in recorded history, not just since the invention of agriculture 10,000 years ago. Since before modern humans existed millions of years ago.

Some believe that global warming, which is responsible for at least 1ºC (1.8ºF) of warming compared to pre-Industrial Age levels, has already triggered an irreversible feedback loop that will see much of the polar ice sheets melt. Whatever the case, the effects of man-made climate change are sorely felt around the world now. The Arctic, which warms twice as fast than the global average, lost nearly one million square kilometers (620,000 square miles) of winter sea ice cover since 1979 — that’s an area twice as large as Texas. Heat waves and droughts are more common and every new year seems like it’s the warmest on record. 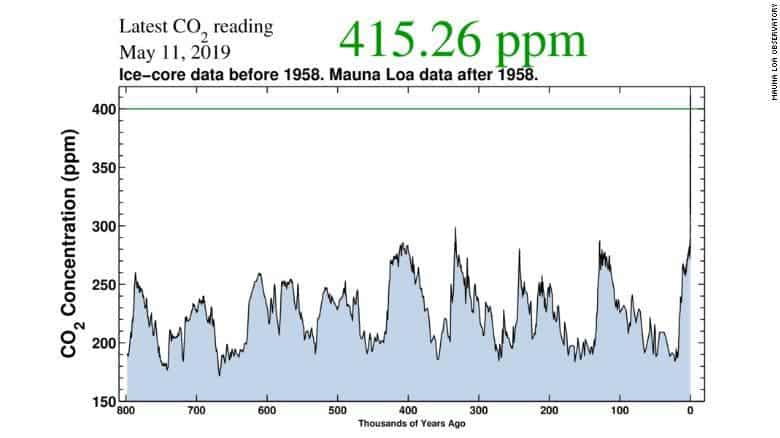 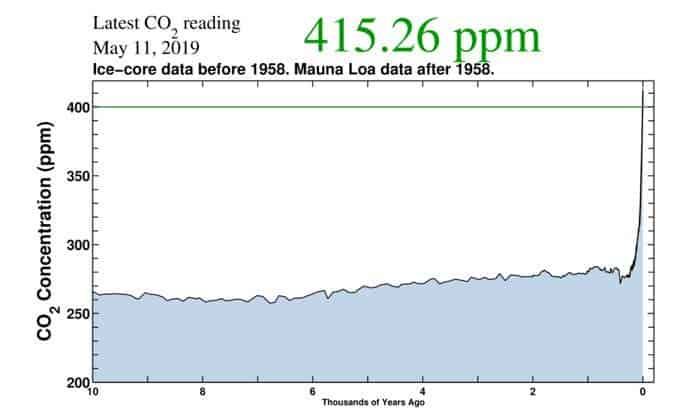 Scientists at the National Oceanic and Atmospheric Administration and the Scripps Institution of Oceanography have been measuring atmospheric carbon since 1958 when the program was started by the late Charles David Keeling. The famous, constantly updated graph that shows the accelerated rise of CO2 in the atmosphere, known as the Keeling Curve (shown above), is named after him.

The latest recorded figure, which stands at 415.26 ppm of CO2, is unprecedented in millions of years. The last time this happened, during the Pliocene Epoch, the Arctic was covered in trees and global sea levels were 25 meters higher than today.

Comment from Ralph Keeling, director of Scripps CO2 Program: “The average growth rate is remaining on the high end. The increase from last year will probably be around three parts per million whereas the recent average has been 2.5 ppm….” 1/2

The year’s increase in CO2 in the atmosphere has been partly fueled by El Niño conditions — changes in the sea-surface temperature of the tropical Pacific Ocean. This warms and dries tropical ecosystems, reducing their uptake of carbon, and exacerbating forest fires. However, the main factor responsible for the upward trend is, by far, the burning of fossil fuels.

According to a 2017 study, if the world continues on this business as usual route, by 2050 CO2 levels could rise beyond anything the Earth’s atmosphere has seen in the last 50 million years (600ppm). That’s not a death sentence in and of itself — life has flourished in those conditions before — but the shift is too fast and brutal for animals to adapt. A lot of today’s species will find it difficult (if not impossible) to adapt to those conditions in such a short time. As for humans, climate change threatens communities through rising sea levels, more frequent extreme weather, heat waves, and food shortages.

All the signs are pointing to an impending disaster if we don’t do something about it. This means moving to zero-emission energy generation as fast as possible. But that’s not enough — we also need to increase carbon capture and sequestration by planting more forests and developing new technologies that can safely lock excess carbon from the atmosphere.

The notion that the climate change we’re experiencing today is mainly driven by a natural climate cycle is silly and not rooted in scientific reality.