We have a pretty solid track record for ignoble milestones. 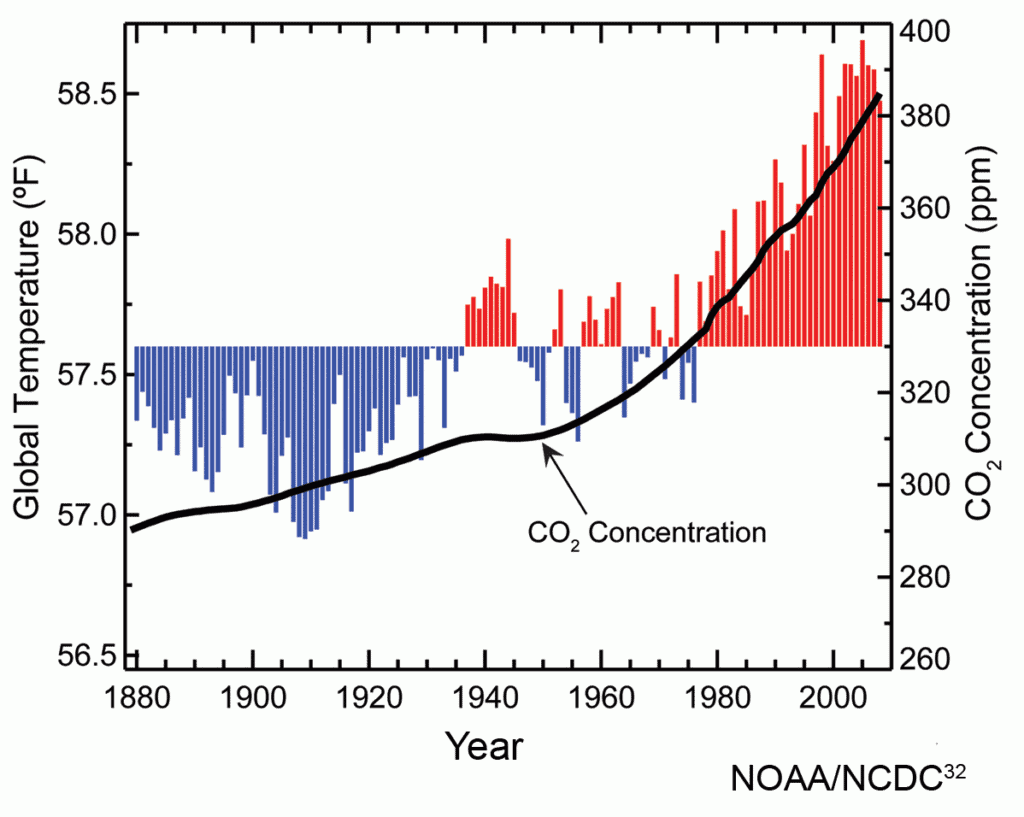 Does this look like a natural variation to anyone?Due to rampant air pollution from burning fossil fuels, carbon dioxide levels in the atmosphere are reaching levels unprecedented in the past 3 million years. If the world continues on this business as usual route, by 2050 it would rise beyond anything the Earth’s atmosphere has seen in the last 50 million years. That’s not a death sentence in and of itself — life has flourished in those conditions before. But world looked radically different at the time. A lot of today’s species will find it difficult (if not impossible) to adapt to those conditions in such a short time. As for humans, climate change threatens communities through rising sea levels, more frequent extreme weather, heat waves, and food shortages.

This rather depressing news comes from a new paper published in Nature Communications. The authors compiled 1,500 carbon dioxide estimates to make a timeline that extends 420 million years in the past. During this time frame, CO2 levels never exceeded 3,000 parts per million. Today, global average CO2 levels are around 410 parts per million (ppm) but the beginning of the Industrial Revolution, less than 170 years ago, the atmosphere only had 280 ppm of CO2.

Scientists measure CO2 levels through a variety of ways, from in situ sensors to record gas levels in the air to satellites. To learn what was the atmospheric composition in the past, scientists employ tools or proxies like ancient air bubbles trapped deep in the ice of Greenland and Antarctica.

If we keep emitting carbon dioxide at the current rate, the international team of researchers concludes that by mid-century CO2 levels could rise to around 600ppm. This much CO2 in the atmosphere hasn’t been seen since the Eocene, some 50 million years ago.

During the Eocene, our planet looked radically different. The global mean surface temperature was 10 degrees Celsius (18 degrees Fahrenheit) warmer than today, there was little to any permanent ice and as such sea levels were much higher. During the Eocene, the Canadian Artic looked more like a tropical paradise complete with palms and swimming crocodiles.

That’s not to say we’ll see crocodiles swimming in Canada’s Great Lakes once the 600ppm threshold is breached. But seeing how CO2 molecules can persist in the atmosphere for centuries, there will be no turning back even if we miraculously reach zero emissions. If even then we continue to burn fossil fuels at the current rate, by the 2200s CO2 in the atmosphere will reach levels unprecedented in 420 million years.

Some believe today’s warming, taking us about one degree Celsius (1.8 F) higher than before the Industrial Revolution, has already triggered an irreversible feedback loop that will see parts of the West Antarctic ice sheet melt. Whatever may be the case, the effects of man-made climate change are sorely felt around the world now. The Arctic, which warms twice as fast than the global average, lost nearly one million square kilometers (620,000 square miles) of winter sea ice cover since 1979. That’s an area twice as large as Texas. Heat waves are more common and last year was the warmest on record.

The world needs to smart up. All signs are pointing to an impending disaster if we don’t do something about it. This means moving to zero emission energy generation as fast as possible. But that’s not enough — we also need to increase carbon capture and sequestration by planting more forests and developing new technologies that can safely lock excess carbon from the atmosphere.

The notion that the climate change we’re experiencing today is mainly driven by a natural climate cycle is silly and not rooted in a scientific reality.