Half of the cobalt in our batteries is mined by children

According to a report published by Amnesty International, half of the world's Cobalt, an important element used in lithium batteries, is mined in the Democratic Republic of Congo (DRC) by child miners. Most handheld electronics today (like smartphones or tablets) incorporate lithium-ion batteries (LIBs) based on lithium cobalt oxide (LiCoO2), which offers high energy density.

According to a report published by Amnesty International, half of the world’s Cobalt, an important element used in lithium batteries, is mined in the Democratic Republic of Congo (DRC) by child miners. 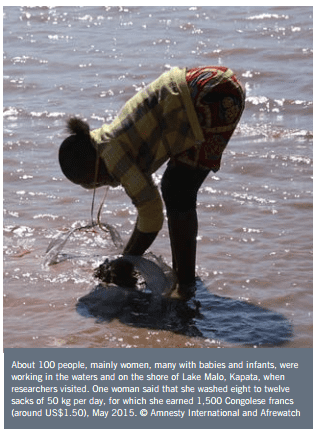 Most handheld electronics today (like smartphones or tablets) incorporate lithium-ion batteries (LIBs) based on lithium cobalt oxide (LiCoO2), which offers high energy density. The Democratic Republic of the Congo is the world’s largest cobalt production, having significant quantities of the world’s total Cobalt resources. If you’ll listen to gadget and phone producers, they’ll tell you that child labor is not involved in their products, but that may not be true.

According to the report, artisanal mining is becoming more and more common.

“The DRC is one of the poorest countries in the world and has suffered from decades of war and poor governance. Artisanal mining became a source of livelihood for many people when the largest state owned mining company collapsed in the 1990s.”

Researchers followed vehicles of miners and traders as they were transporting cobalt ore from the artisanal mines to the markets, where they were traded. They found that independent traders, mostly Chinese, would buy the ore without caring where it came from. They would then sell it on to larger companies for processing and export.

This is a severe breach of human rights – not only are these mines unsafe and often involve child labor, but companies often that they have a zero tolerance policy when it comes to child labor in their supply chains. According to Ars Technica, a  14-year-old orphan named Paul said he works incredibly long hours underground.

A whopping half of the cobalt in the batteries we use is mined by children, according to the findings, and it’s not just the mines themselves that are dangerous. One girl, Mathy, described how in 2012, when she was 12, she and a friend were caught on the concession by security guards:

According to Roger, aged 13, private security guards, “used to whip us, and sometimes they used to dunk us in dirty water.”

The companies mentioned by the report were quick to react, stating that they were unaware of any child implication in their products. Apple told Amnesty International that it is “currently evaluating dozens of different materials, including cobalt, in order to identify labor and environmental risks as well as opportunities for Apple to bring about effective, scalable, and sustainable change.” Vodaphone told Amnesty International that it “is unaware as to whether or not cobalt in our products originates in Katanga in the DRC… both the smelters and the mines from which the metals such as cobalt are originally sourced are several steps away from Vodafone in the supply chain.”

Samsung and Microsoft commented as well.

“In reality, it is very hard to trace the source of the mineral due to the suppliers’ nondisclosure of information and the complexity of the supply chains. Therefore, it is impossible for us to determine whether the cobalt supplied to Samsung SDI comes from DRC Kataanga’s mines,” Samsung told Amnesty International.

Of course, they’re right – it is very hard to trace the source of the mineral, which is why companies shouldn’t be too quick to state that there is no child labor in their supply chains. Amnesty further found out that none, not a single one of the involved companies could trace back their supply chain and actually guarantee that they were extracted legitimately.

“What is very worrying is that none of the companies that we identified through our research and named in investor documents could trace the cobalt they use in their products back to the mines where it originated,” wrote Mark Dummett, business and human rights researcher at Amnesty International. “Around half of all cobalt comes from the DRC, and no company can validly claim that they are unaware of the human rights and child labor abuses linked with mineral extraction in the region.”

In reality though, companies don’t really care where the material comes from – or better put, they don’t care enough to thoroughly investigate or ensure proper conditions. The material comes in, and it comes in cheap. Think about that when you’re using your smartphone.