I had the chance to witness, on several occasions, how bears change their behaviors when people feed them (which they really shouldn’t!). Bears, who usually just avoid people, or if they feel threatened display some sort of aggressive behavior, just started to beg for food, much like a dog around Thanksgiving dinner. This dramatically altered their general behavior, and as it turns out, it’s not just bears. 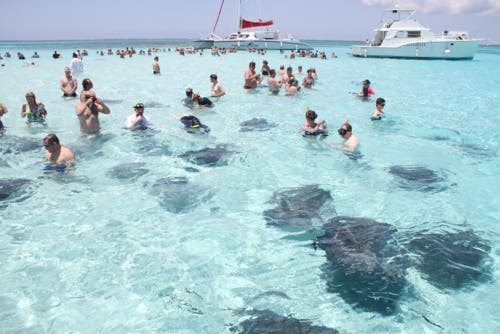 Stingray populations that have substantial interaction with tourists, such as those in some regions of the Cayman Islands, have started to act very different than they would naturally do. First of all, they completely modified their schedule; from nocturnal animals, they are now diurnal, adapting to the humans’ schedule. Second of all, stingrays which are solitary animals are now gathering in “packs” (there’s not even a word for more of them), and instead of mating seasonally, they now mate all year round. Oh, and that’s not all – they’re also much more aggressive than they used to be.

So you change their schedule by 180 degrees, you change how they mate, how they interact with each other, and how aggressive they are – pretty much everything. The populations in case here are a part of the so-called ‘interactive tourism’ that has become popular in many parts of the Caribbean; basically, tourists get the chance to interact with animals in a relatively controlled environment.

“Measuring that impact is important because there’s a lot of interest in creating more of these interactive ecotourism operations, but we know little about the life histories of the animals involved or how they might change,” said study co-author Guy Harvey, a marine wildlife artist and conservationist that started the Guy Harvey Ocean Foundation with Nova Southeastern University of Fort Lauderdale.

But as I explained above, no one really considered the effect humans will have on the animals.

“We saw some very clear and very prominent behavioral changes, and were surprised by how these large animals had essentially become homebodies in a tiny area,” said study co-author Mahmood Shivji, director of the Guy Harvey Research Institute and NSU Oceanographic Center professor, who led the study. There are likely to be some health costs that come with these behavior changes, and they could be detrimental to the animals’ well-being in the long term,” Shivji said. “Stingray City means big business in the Cayman Islands, where each stingray generates as much as $500,000 annually in tourism income,” Harvey said. “The team plans to continue to monitor Stingray City’s population to track its health — and the industry’s impact — over time.”

What’s interesting if you ask me is just how fast animals adapt to the change in their environment. But when you look at the big picture, the role that humans have in the extinction of the many animals becomes more and more evident.