by Tibi Puiu
in Animals, Discoveries
Reading Time: 3 mins read
A A
Share on FacebookShare on TwitterSubmit to Reddit 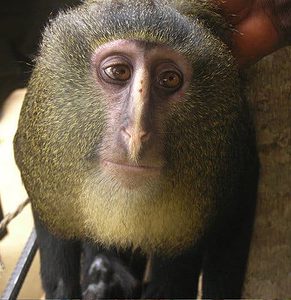 This bright little fellow is known as the lesula to the local people of a remote part of the Democratic Republic of Congo, and as of recently has been recognized as a new, distinct species of monkey. Lucky for the lesula, the discovery came in the nick of time for preservation efforts to be rolled, as the species faces extinction due to extensive hunting.

Though the monkey bares a cunning resemblance to the owl-faced monkey, the lesula can be easily differentiated by its blond chin and upper chest, in contrast to its dark limbs. Also It has a reddish-colored lower back and tail. The first lesula found was a young captive animal seen in 2007 in a school director’s compound in the town of Opala in the Democratic Republic of Congo.

“And adult males have a huge bare patch of skin in the buttocks, testicles and perianal area,” said John A. Hart, the researcher who described the coloring. “It’s a brilliant blue, really pretty spectacular.”

Look closely in the lesula’s eyes – doesn’t it remind you of a person, a known figure of some kind? Well, some readers from CNN quickly jumped on the news and started making bets on who bares the greatest resemblance to the lesula. Finalists include David Schwimmer from Friends, Jake Gyllenhaal, da Vinci’s Mona Lisa or Jesus.

Laughs aside, since it was first sighted, thorough tests and analysis were performed which revealed that indeed that the monkey is a genetically distinct species, now called Cercopithecus lomamiensis by its scientific name. Researchers are worried, however, concerning the lesula’s fate as the new monkey’s range covers one of Congo’s last “biologically unexplored” forest blocks. Although the scientists involved in the study were able to identify more lesulas in the wild, “under the current trends of uncontrolled bush-meat hunting, it could become very endangered.”

“After searching for several days in the most densely populated lesula habitat, I finally got a glimpse of the species on the last day in the forest,”  said Florida Atlantic University (FAU) Assistant Professor of Anthropology Kate Detwiler. “After the excitement of confirming the new species in the genetics lab, the chance to see the lesula in its natural habitat was especially gratifying. The fact that we are just finding a new species of primate in this area of the Congolese rain forest in the 21st century indicates that there is still so much to learn. We are very lucky that we found the lesula while there is still time to save it, and the discovery fuels the drive to raise awareness about and support for conservation of this incredibly diverse ecosystem.”

Indeed, as Professor Detwiler perfectly synthesizes, we’re in 21st century and still there are species, of monkeys even, which have yet to be identified. FAU’s news statement said that a significant area of the new species’ known range is now proposed as a new protected area, the Lomami National Park.  ”This will be the first national park established in the Congo through consultation with local communities from the outset,” the statement added.

The findings were described in a paper published in the journal Plos ONE.