The July Awesome Animal Award goes to: The Sea Swallow

A while ago, we started this animal award, giving the first one to the mimic octopus, and the second one to the amazing Siberian salamander, which can survive after being frozen in temperatures as low as -45 degrees Celsius. Each month, we’ll highlight an animal so special and unique it just makes you go ‘Wow!’. This month it’s the living pokemon, the sea swallow, the blue sea slug: Glaucus atlanticus.

The strange beauty of its animal is enough to make it spectacular on its own, but this creature is more remarkable than it seems at a first glance. It is a marine gastropod mollusk, much like clams and oysters, but unlike them, it doesn’t have a solid shell. It is the only member of its family, although it is closely related to Glaucilla marginata, to which it bears quite a resemblance. It typically eats plankton or other microscopic algae, but what’s truly interesting is that it can eat Portuguese Man O’ War (Physalia physalis), a poisonous jellyfish-like creature; but not only does it eat it, but it also consumes the entire organism, storing the venomous nematocysts for its own use, in the thin feather-like “fingers” on its body. Because it can store the venom from several Portuguese Man O’ War, it can be much more poisonous than the creatures it devours.

But Glaucus atlanticus gets even more awesome: it actually floats on its back, due to a gas-filled sac in its stomach. The dorsal side, which is actually the foot and underside, is blue or somewhere between blue and white, while the true dorsal surface is completely silver-grey. This is a remarkable adaptation called counter shading, which helps trick predators. 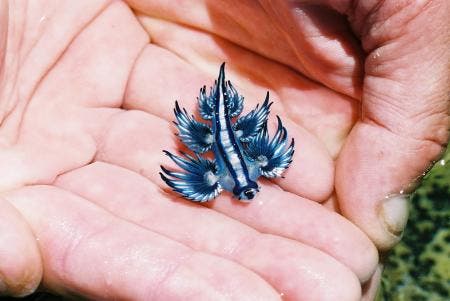 Glaucus is also a hermaphrodite a hermaphrodite, containing both male and female reproductive organs, and even more interesting, after the mate, both animals produce eggs.