Well we all use disposable tissues, dishes, I’ve heard of disposable tails of even limbs, but a disposable penis? Talk about taking things to the next level… But that’s exactly what this sea slug has. After mating, it simply discards its penis, grows a new one, and can even have sex again the same day. 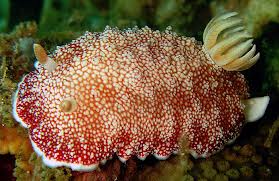 Chromodoris reticulata, is a type of soft-bodied marine mollusk, and as for the penis disposing process, researchers explain that it simply just falls off. Lead author Ayami Sekizawa from the Osaka City University and his team watched the species copulate 31 times and found that the animals are “simultaneous hermaphrodites” – meaning that both members are both the “man” and the “woman”, impregnating each other.

A typical mating episode involves two individuals touching each other with their genital orifices, then starting the copulation. After a while, one of them backs off, then the other backs off, then they walk for a while with elongated penises, and then the genitalia just sever from their bodies and float away.

“The sea slug sheds 1/3 of the internal penis length after each copulation,” Sekizawa said. “The sea slug is able to grow the penis gradually to its original length.”

But this loss doesn’t seem to hamper the sea slug’s life:

“In one case,” the researchers wrote, “we observed three successive copulations each separated by approximately 24 hours.”

There still isn’t a good explanation for why this happens, but there are a handful of other animals that exhibit a similar behavior. Argonauta, a type of octopus and some orb-weaving spiders have the same type of behavior.

“Little is known about mating behavior in simultaneously hermaphroditic animals,” Sekizawa said. “The disposable penis in our nudibranch (sea slug) study is merely one case of peculiar mating behavior” in these animals.”