Geckos can walk on water: here’s how (with a video)

Another mystery solved my science!

A unique blend of surface tension and fast slapping is what allows the geckos to skid across water incredibly fast, at almost a meter a second. Inspired by geckos, scientists could one-day design rapid swimming robots designed for search and rescue in flooded areas.

Some insects, such as fishing spiders and water striders, habitually walk on the surface of water with ease. They do so thanks to their small surface area to volume ratio, which allows the water’s surface tension to support the animals. Geckos are far too large to be supported by the water’s surface tension, but these nifty creatures — which are also expert climbers, being able to cling to virtually any surface like Spiderman thanks to thousands of hairy structures that line the bottom of their feet — still manage the biblical feat.

[panel style=”panel-info” title=”What is surface tension” footer=””]Surface tension is the property of a liquid surface which acts as if it were a stretched elastic membrane. This phenomenon can be observed in the nearly spherical shape of small drops of liquids and of soap bubbles[/panel]

Researchers now think they know how. The team of biophysicists, which included Jasmine Nirody (University of Oxford) and Ardian Jusufi (Max Planck Institute), placed Asian house geckos (Hemidactylus platyurus) inside an experimental setup. The lab experiment consisted of a long water tank, with a plank attached across the top. The water’s surface tension was varied by adding soap.

One by one, the geckos were placed inside the tank while high-speed cameras recorded as the startled critters whizzed across the water. The footage showed that the geckos’ tiny legs slapped and stroked the water’s surface, which created air pockets that kept most of their bodies afloat. Remarkably, the geckos trotted across the surface of the water much as they do on land — their hydrophobic (water-repellant) skin and stabilizing tails also helped.

Gecko running over water in the wild. Credit: Pauline Jennings.

When soap was added — which causes water to lose its molecular adhesion — the geckos’ speed was reduced by half. This showed that surface tension plays a major role in the animals’ locomotion over the water’s surface. In fact, the geckos should have sunk if surface tension was the only thing keeping them afloat. It’s thanks to their rapid slapping that the geckos are still able to run over water — but only briefly because it requires a lot of energy, the authors reported in the journal Current Biology.

“Animals move in such weird and different ways, and geckos are a good example of that,” says Nirody. “Geckos make use of several locomotive modes when running across water, which makes it more difficult to characterize.”

“Even knowing the extensive list of locomotive capabilities that geckos have in their arsenal, we were still very surprised at the speed at which they could dart across the water’s surface,” says Nirody. “The way that they combine several modalities to perform this feat is really remarkable.” 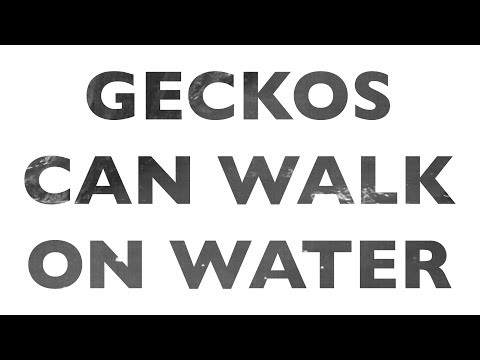