Galapagos penguin “teenagers” still beg their parents for food, and they oblige— when there’s a lot of food

"And mom, can you pay my rent? This beach is expensive."

by Elena Motivans
in Animals, News

Galapagos penguin “teenagers” still beg their parents for food. These “teenagers” are called fledglings; they have already left the nest and are more or less fully-grown. Sometimes, there is lots of food around the Galapagos islands, and sometimes, there isn’t so much. When there is a lot of food available, the parents can indulge their children and feed them. They feed their grown offspring because they could help them survive, without threatening their own survival.

“Through field seasons over the years when we were observing penguin behavior in the Galapagos Islands, we saw these isolated instances of adults feeding individuals who had obviously fledged and left the nest. And now we’ve collected enough field observations to say that post-fledging parental care is a normal — though probably rare — part of Galapagos penguin behavior.”—P.D. Boersma, lead author 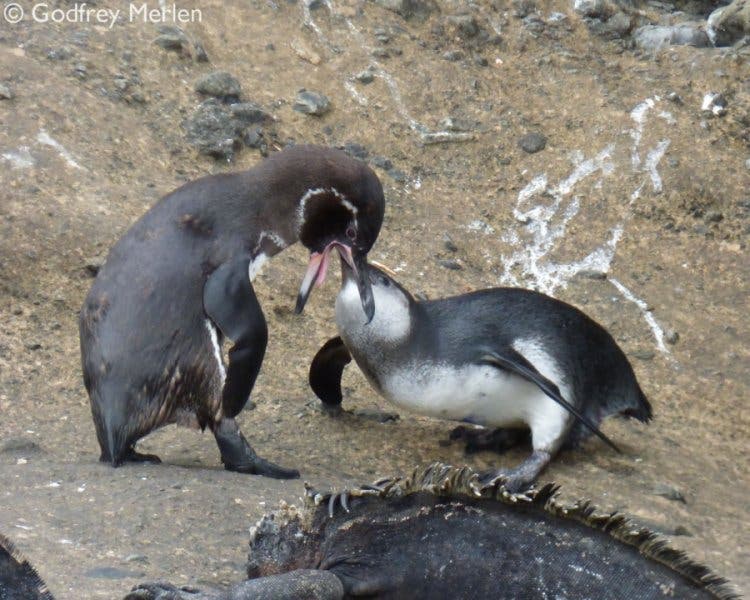 Researchers observed parents feeding fledglings five times from 2006-2015. The fledglings are easy to recognize because they have light feet and cheeks, but they’ve mostly lost their baby feathers. They approached adults that just came back from fishing and begged dramatically. Not all of the beggars were successful. For instance, older fledglings also tried but were never fed.

The area around the Galapagos islands varies a lot in regards to the amount of food available. Some years, there is tons of food and some years, a scarcity. It depends on the climate patterns in the Pacific Ocean, like if there is an El Niño. When there is lots of food, the parents are more likely to feed their offspring.

“When climate patterns are ideal, ocean currents bring plenty of fish to the Galapagos for the penguins, but when you get a strong El Nino, the adults struggle to feed themselves and meet the energy demands of their own bodies. Galapagos penguins have adapted themselves not to the seasons, but to the whims of the bounty of the ocean,”—P.D. Boersma.

Galapagos penguins may feed their teens to help them survive and take advantage of plentiful periods. The penguins help their offspring only when there is plenty of food so they won’t hurt their own chances of survival.

Although many seabirds feed their offspring even after they leave the nest, only one other penguin species, Gentoo penguins, does. Galapagos and Gentoo penguins are probably the only penguin parents that act like this. One reason for this behaviour is that the parents stay close to their children even after they leave the nest. In most other penguin species, the fledglings are independent. They go off the sea after leaving the nest and don’t come back to the breeding colony for a few months or even years. This independence doesn’t leave any chance for the parents to take care of them even if they wanted to.

It seems like these penguin parents aren’t done with their work when their children leave the nest. They still help out their offspring when they need it.. if they have enough food for themselves.