Recently, a big drop in swallow road-kill numbers was observed, without humans changing anything on their part. So biologists set out to see what swallows have been doing differently that allows them to be so much better at avoiding cars. 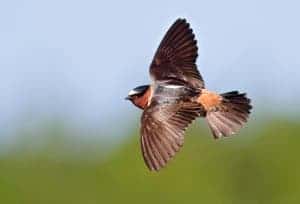 They discovered that roadside nesting cliff swallows have evolved shorter, more manoeuvrable wings that gives them an edge when it comes to making hasty retreats from cars.

“I’m not saying that it’s all because of wing length,” says Charles Brown, a biologist at the University of Tulsa in Oklahoma and one of the authors of the study. But, he says, the shortening does support the idea that the birds are adapting to disturbed environments, as other organisms presumably are.

During the past three decades, the numbers of swallow victims has decreased continuously, and as Mary Bomberger Brown, a ornithologist at the University of Nebraska–Lincoln explains, the shorter wings are the key – swallows with shorter wings are more agile and better adapted to the new situation and create more offspring.

But even if it seems like a perfect example of evolution and their field observations matched what they predicted, but proving such a short term evolution is pretty hard, and has raised some critique.

It is hard to definitely prove that animals are adapting to living around roads, says behavioural ecologist Colleen St. Clair at the University of Alberta in Edmonton, Canada. But, she says “this is the best demonstration that they do have that capacity”.