Elephant starts crying after being released from 50 years of abuse

For 50 years, Raju the elephant was abused. He was shackled, held in spiked chains, his spirit and his body purposely broken. But that all change when finally, he was rescued by wildlife conservationists. When he realized that he was being saved, the elephant was so emotional that he started crying. 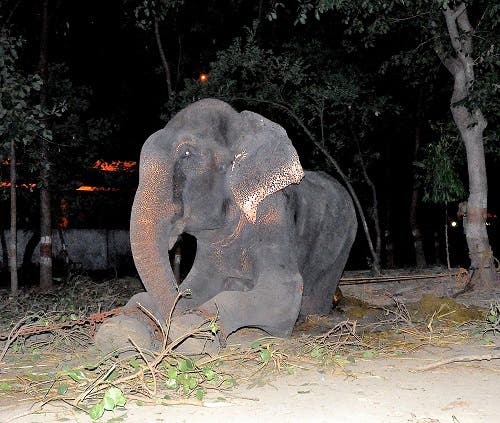 “They [the rescue team] went in to rescue him and they [his captors] had bound him up so tightly that he was in a lot of pain,” Pooja Binepal, a spokesman for Wildlife SOS said. “The vet and our team came with fruits and just started speaking softly to him and to reassure him that we were there to help, and it was at that time that tears flooded down his face. The founder of Wildlife SOS, who was there are the time of the rescue, said …. that really caught him off guard. They’ve done a lot of elephant rescues and the fact the the tears were just coming down … he was weeping. It was an emotional moment and everyone was more motivated to get him on the truck and to safety.”

Wildlife SOS is a group established in 1995, to protect not only elephants, but all wildlife in India. They set out to rescue Raju on July 2.

There is no much information about Raju’s early life – but the wounds and abscesses on his body tell most of the story. He was probably born in the wild and captures when he was just a baby. For him, his entire life was spent in chains, with not a single day of freedom – and he probably would have never found it, hadn’t it been for Wildlife SOS. He was “working” as a begging elephant in Allahabad. The people would give his owner money in exchange for Raju’s “blessings”.

“Raju was in chains 24 hours a day, an act of ­intolerable cruelty. The team were astounded to see tears roll down his face during the rescue,” Binepal said, per the Mirror. “It was incredibly emotional. We knew in our hearts he realized he was being freed. Elephants are majestic and highly intelligent animals. We can only imagine what torture the past half a century has been for him.”

It was on the 4th of July that Raju took his first steps in freedom, in the past half century. He also probably had his first good meal in just as long. Judging by the way he looks, most of the food he was given was inappropriate for elephants – but half starving, Radu would eat anything. 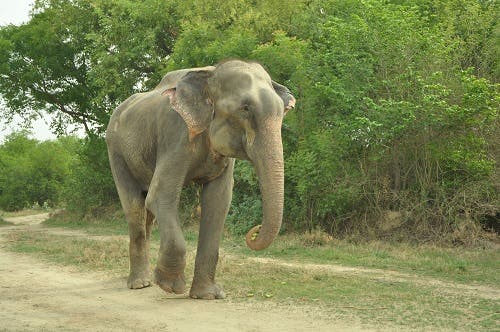 Of course, his owner and mahout were not cooperative – they tried to prevent him from being rescued. They tightened his chains and gave him confusing commands. They also had people block the roads, trying to prevent the rescue truck from arriving. But their efforts were in vain. Finally, the team arrived, finding Raju in a deplorable condition. It took them hours of calmly talk and fruits to finally gain his trust and make him go in the truck. He was taken to the Elephant Conservation and Care Centre in Mathura. In the few days since then, he has made considerable progress. His wounds are starting to heal, and he is looking a bit better.

More than anything, now it is time for Raju to rest. After 50 years of torturous abuse, he deserves.

Just a reminder: if you travel to Thailand or India (or other countries) and you are considering to go elephant riding or something like this – don’t do it! The elephants may seem calm and peaceful, but that is because of the torture they have been subjected to. The practice of Phajaan involves placing the elephant in a very tight cage where he cannot move, until his spirit is broken. He is then beaten again and again and again until he obeys the commands without any resistance. They often disguise this practice as “conservation tourism” – but this is not true. Elephants are majestic animals, and they are not made to be ridden.

If you want to support Wildlife SOS, be sure to check out their website. You can give them money and sponsor individual animals, who will be eternally grateful for your help.