A London-based customer of Whole Foods tweeted a photo of peeled oranges, packed in plastic. Her photo and comments are on point.

by Mihai Andrei
in Environment, Environmental Issues, Green Living, Pollution
Reading Time: 3 mins read
A A
Share on FacebookShare on TwitterSubmit to Reddit

A London-based customer of Whole Foods tweeted a photo of peeled oranges, packed in plastic. Her photo and comments are on point:

If only nature would find a way to cover these oranges so we didn’t need to waste so much plastic on them. pic.twitter.com/00YECaHB4D

This is a growing problem in most of the developed world: pre-prepared food in wasteful, plastic packaging. Plastic recycling has grown significantly in recent years, but still remains well under the 10% line, with over 85% of all globally produced plastic being thrown away in landfills or in the oceans. A growing part of this burden comes from the fact that so many things are individually packaged and discarded. Increasing plastic waste for such a minor convenience seems simply outrageous from an environmental point of view – and this was subsequently confirmed on Twitter. Several people went to their local Whole Foods and took pictures of foods needlessly packaged in plastic. I too can confirm that at least in the UK, retailers seem to have an unhealthy obsession with packaging foods in plastic. There are things like pre-boiled eggs in plastic, pre-cut apples in plastic, basically pre-everything in plastic. As mentioned above, this is a growing concern and has to stop.

Thankfully, Whole Foods was quick to reply, stating that they will pull out the said oranges off the shelves in favor of the natural variety.

@awlilnatty Definitely our mistake. These have been pulled. We hear you, and we will leave them in their natural packaging: the peel.

In a simpler world, that would be the end of our story… but there’s a twist, and our world is not simple. As it turns out, for some people, pre-peeled oranges are more than a minor convenience, they are a necessity. As several Twitter users mentioned, conditions such as Parkinson’s or arthritis make it very difficult to peel the fruits:

@WholeFoods @awlilnatty I’m so sorry you’ve decided to do that. I have rheumatoid disease and it’s often impossible to peel an orange.

.@WholeFoods@awlilnatty Please dont. A lot of ppl with disabilities like arthritis see them as a lifesaver, and don’t appreciate the “joke”

So, this leaves us with an interesting discussion. It can’t possibly be right to leave plastic-packaged oranges for everybody, but we should help disabled people enjoy the fruits. A solution would perhaps be to have shop staff peel the fruits for them, but that could be an undignifying experience, what do you think? Where do you stand on this one? 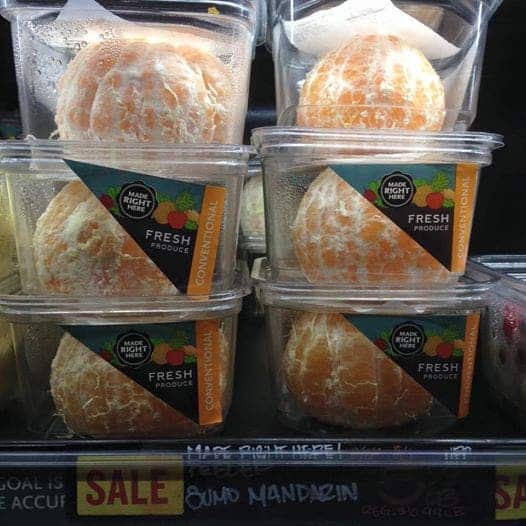