The Iberian Lynx, the world’s most endangered cat, grows to over 400 individuals

The population dropped sharply from over 5,000 individuals fifty years ago to less than 150 cats ten years ago. However, thanks to recent efforts, the population has grown to 400 individuals, and there are good signs for the species.

The Iberian lynx is an endangered feline species living in the Iberian Peninsula in southwestern Europe – in Spain and Portugal. The population dropped sharply from over 5,000 individuals fifty years ago to less than 150 cats ten years ago. However, thanks to recent efforts, the population has grown to 400 individuals, and there are good signs for the species. 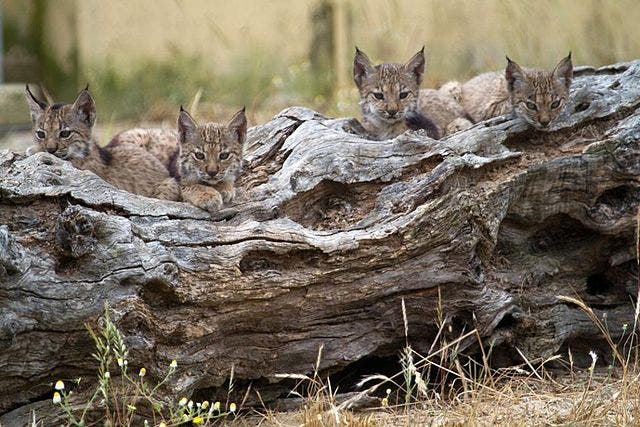 If the Iberian lynx were to become extinct, it would be the first feline to ever become extinct since prehistoric times. Their habitat was destroyed continuously over the past decades, mostly to infrastructure, urban and resort development. To make things even worse, their natural prey (rabbits) dropped massively in numbers due to diseases such as myxomatosis and hemorrhagic disease. With shrinking habitats and no food, the lynx future looked dire.

However, a reintroduction program ensured the growth of their numbers. The most recent survey identified 404 individuals, up from the 327 recorded in 2014. The survey identified 120 breeding females divided into five areas of the Iberian Peninsula including four in Spain – Doñana, Sierra Morena, Montes de Toledo, Valley Matachel – as well as Portugal’s Vale do Guadiana.

It is time to rejoice, but that time mustn’t be long. These are promising first steps, but they are just first steps.

“The increasing numbers and expansion of Iberian lynx show that concerted conservation efforts pay off,” said Carlos Drews, director of WWF’s global species programme. “This endangered cat is symbolic of the plight of numerous threatened species worldwide that require sustained conservation efforts over several decades. But the job is not completed yet – it’s on the right track, but still distant from a full recovery. “

The same threats remain – habitat continues to be destroyed, and rabbit populations continue to dwindle.

“It is essential that all competent authorities take action on the threats to rabbits and begin to implement better monitoring plans and actions for species recovery,” said Luis Suarez, head of WWF-Spain’s species programme. “Otherwise, we will see a real ecological catastrophe given the key role of the rabbit in Mediterranean ecosystems.”

In other words, we have to start tackling the problem at its source, and ensure that the rabbit population will continue to survive in the ecosystem. The gains in lynx numbers are not stable at the moment, and the proper measures have to be ensured.

There are also new threats to the lynx. The survey showed a total of 51 lynx killed on the roads over the past three years – that’s 20% of today’s population, and an unacceptably high figure. There is no solution in sight, with the lynx habitat being fragmented by roads in so many points. This once again highlights the need for green corridors — continuously green and wild areas that allow free circulation of the wildlife to all ends of their habitat.