The elusive creature lives deep beneath the ocean's surface.

Thousands of feet below the ocean’s surface, scientists came across a dazzling sight with the help of the prying eye of an unmanned robotic submersible. Under a background of giggles and ovations, the video that the researchers recorded features an adorable-looking dumbo octopus, named so because its flapping fins on the side of its head resemble the famous Disney character. 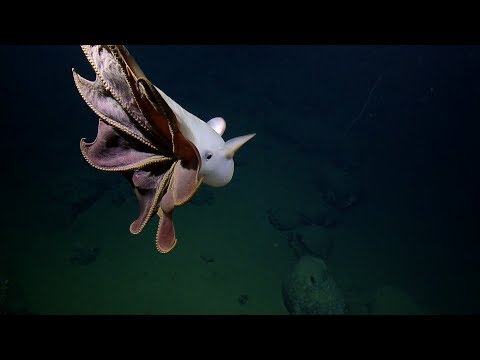 There are 13 known species of dumbo octopuses (Grimpoteuthis), all of whom live close to the ocean floor at depths of 3,000 to 4,000 meters (9,800 to 13,000 feet). These small animals are easily recognizable by a pair of fins located on their mantle and webbing between their eight arms. Their favorite food is comprised of snails, worms, and other creatures that live on the ocean floor.

At such depths, catching a glimpse of a dumbo octopus is very rare, which explains all the “all my gosh!” reactions of the crew from the E/V Nautilus research vessel. The actual footage was shot by a remotely-operated vehicle (ROV) named Hercules.

“Oh, and the world loves a dumbo,” one of the crew marveled. And I’m sure we all can agree.

While the researchers were enraptured by the eerie sight, they still made sure to study the animal. Lasers mounted on the ROV measured the deep-sea ghost at 60 cm (2 feet) long, which is on the hefty side as far as these species are concerned.

Although they were grateful for Dumbo’s visit, the researchers weren’t actually searching for it. Instead, they were tasked with surveying the Davidson Seamount, an extinct volcano in Monterey Bay National Marine Sanctuary.

The Monterey Bay region where the Dumbo octopus was sighted is packed with corals, sponges, and numerous other invertebrates — a sort of ‘oasis of the deep’ that attracts all sorts of animals. Indeed such hotspots are teeming with life as the researchers would come to know. Only a few days after the Dumbo sighting, the Nautilus crew stumbled across an immense octopus nesting site where more than 1,000 mothers were nursing their young. 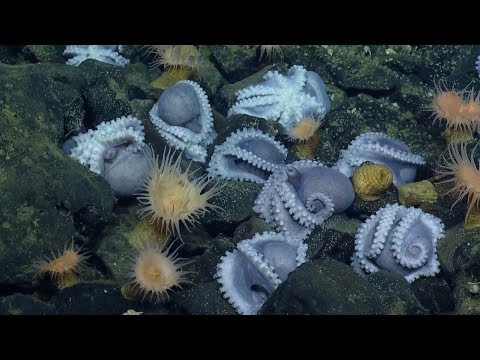