Deep sea squid has tentecle tips that ‘swim’ on their own

Many deep sea animals, such as the infamous anglerfish, use parts of their bodies as decoys, to attract unsuspecting prey. Now, researchers have found that a certain squid can do this as well – its tentacle tips flap and flutter as if swimming on their own. Biologists believe that the mesmerizing movement of the tentacles lures small shrimp and other animals to approach within reach of the squid. 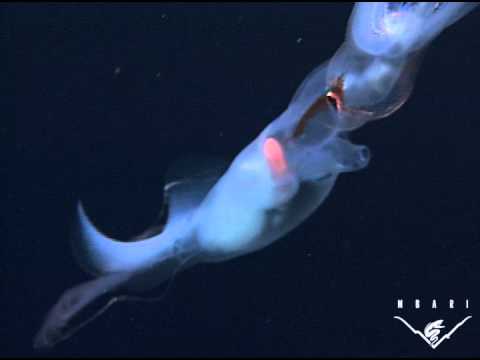 Most squids have eight tentacles which act as ‘arms’, and two longer tentacles which they use for feeding. The tips of the tentacles are often broader and armed with suckers or hooks – used for preying. Deep sea squid Grimalditeuthis bonplandi, named after the reigning family of Monaco, seems to employ a different strategy. A slow, almost lazy swimmer, with a gelatinous body and long, fragile tentacles, it is the only known squid which doesn’t have suckers, hooks, or photophores (glowing spots).

Until a few years ago, nobody had ever seen a living G. bonplandi, except for those captured in thrawling nets. However, using video from underwater robots known as remotely operated vehicles (ROVs), the authors of the recent paper were able to study how these squids act in their natural habitat, 1-2 km below the surface.

As you can see from the video, when the ROV first approached, the squids were just hanging around in the water, with their eight arms spread and its two feeding tentacles just dangling below. What intrigued biologists was not that they didn’t move on their own, but that the tip of their tentacles (clubs, as they are often called) were propelled by fluttering and flapping motions of thin, fin-like membranes. The clubs basically appeared to be swimming on their own, while the tentacles were just trailing behind. Instead of acting like most squids, G. bonplandi sends its clubs swimming away from its body, dragging the tentacles behind. Also, when threatened, instead of retracting its tentacles as most squids would do, it first coils both the tentacles and clubs and hides them within its arms before swimming away.

What all these motions do is give the message that the clubs are in fact smaller animals, swimming on their own, independent from the rest of the body. But what’s interesting is that these clubs don’t glow – which of course, makes them invisible at the depths where the squid is living. But researchers have proposed other mechanisms through which it could attract prey: one possibility is that it can disturb glowing microscopic organisms in the surrounding water, also creating sound and turbulence in the water, which can be detected by their prey. Such vibrations might mimic the vibrations used by prey animals to attract mates. But sadly, the team hasn’t been able to actually see the squid capture its prey – until then, we can’t really know for sure.

Either way, this is just another remarkable case of what you can discover indirectly, with insufficient information, and the improbable adaptation strategies animals can implement in order to survive.