Some chimps like to drink alcohol habitually. “So, a chimp walks in a bar…”

It's nothing new to hear about chimps or monkeys drinking alcohol, most often stolen from unsuspecting tourists, but a new research which documented the chimpanzees of Bossou, south-eastern Guinea, for the past 17 years found some engage in habitual drinking. It's the first evidence of habitual drinking outside humans. Like humans, some enjoy the brew more often than others, while some totally abstain from the habit.

It’s nothing new to hear about chimps or monkeys drinking alcohol, most often stolen from unsuspecting tourists, but a new research which documented the chimpanzees of Bossou, south-eastern Guinea, for the past 17 years found some engage in habitual drinking. It’s the first evidence of habitual drinking outside humans. Like humans, some enjoy the brew more often than others, while some totally abstain from the habit.

From 1995 to 2012, the West African chimps were watched and recorded using cameras by researchers as they went about their daily habits. Apparently, many chimps would regularly visit the local  raffia palms. Humans in the area harvest the sugary sap from the trees to brew alcohol. They typically make a tapered section in the tree, then put some containers underneath to let the white sap slowly ooze in containers placed right below. Within hours, the sap ferments into alcohol, and one single tree can yield up to 50 liters of sap in a year. But the chimps have caught on.

The containers that hold the sap are usually covered with large leaves. Some chimps would go to these seemingly self-replenishing hot spots, chew the leaf a bit until it turned into a sponge-like pad then used it to dip into the container and drink the sap. In the same community, sometime in 2008, one of the chimps used a stick to “fish” for ants, a sophisticated display of tool use. When they have to, apparently chimps also know how to fashion tools that help them get drunk. Though the researchers didn’t directly sample blood to see how much alcohol they’d ingested, the researchers believe some of them got quite “ape” drunk. On one occasion, after he had copiously sipped from the container, a chimp went directly to rest and went sound asleep. Another adult male seemed restless after a drinking session and while his companions made for their nests, spent the next hour swinging from tree to tree.

The fermented sap has an alcohol content ranging from  3.1 per cent to a whopping 6.9 per cent (the equivalent of a strong beer). It takes like cider.

Now, reports of animals getting drunk don’t come as a surprise anymore and make for tear-jerking cheap entertainment on YouTube. This includes Swedish moose that get drunk on fermented apples, or green monkeys stealing tourists’ cocktails in the Caribbean. However, habitual drinking has never been reported so far. In their paper published in  Royal Society Open Science, the researchers at  Oxford Brookes University outline how both male and female chimps engage in regular sap drinking sessions. Some drank more than others. Of 26 apes followed in the report, one chimp named Foaf was the most apt drinker appearing  in 14 of the 51 sessions. But not all of them were that interested, since 13 chimps in the group never partook. 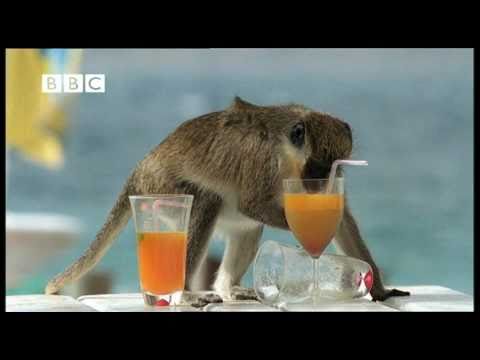 The findings bear a larger significance than just “humanizing” chimps. Humans, like all primates, use the alcohol dehydrogenase enzyme ADH4 to metabolize alcohol. Yet, not all can metabolize alcohol just as well. Lemurs and baboons, for instance, have a less effective version of ADH4, which raises the question: when did humans actually evolve this highly active version of the enzyme? A recent research performed a thorough genetic analysis of primate samples, traced these ancient proteins and found the earliest version of ADH4 dated as far back as 50 million years ago. During this time, however, ADH4 was only able to metabolize minute amounts of alcohol. Some 10 million years later, though, ADH4 could metabolize 40 times more ethanol. So, where do the drinking chimps come in? Well, there’s this theory that our early ancestors, still mostly tree dwelling at that time, would sometimes eat fallen fermented fruit fallen on the ground. Natural selection favored those ancestors which got less drunk (more effective ADH4) while eating more fruit. So, both humans and chimp have those pioneers to thank for their ability to drink alcohol.

The bartender, still amazed by the fact that there’s a chimpanzee in the bar, decides to make some small talk with him. So he starts talking to the chimpanzee: “A chimpanzee! You don’t see that often in a bar..” The chimpanzee looks up and says: “What do you think, one beer costs 25 dollars!

Now, that’s not so absurd as it may seem. For one, chimps might enjoy beer. Secondly, if some monkey can learn how to use money, so could chimps.