by Tibi Puiu
in Health & Medicine, Mind & Brain
A A

The most comprehensive study of its kind found that people working more than  48 hours a week are at a significant risk of drinking more alcohol than it is safe. The study’s findings which included correspondents from 14 countries were not affected by socioeconomic status or region, suggesting they universally apply.  The findings bear important implications for work regulation policies and public health. 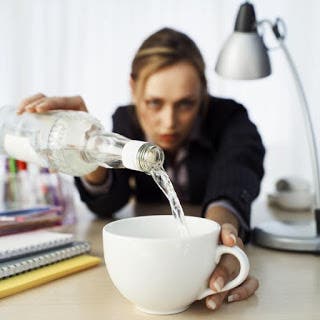 It’s intuitive to link alcohol with long working hours. The more you need to stay at work, the more stressed you become – in general. But while previous studies came to the same conclusion, the present research was the first to go beyond small, tentative samples and provides a systematic analysis on the association between long working hours and alcohol use.

Marianna Virtanen from the Finnish Institute of Occupational Health, Finland, and colleagues made a cross sectional analysis of 333,693 people in 14 countries.  They found that longer working hours increased the likelihood of higher alcohol use by 11 percent. A prospective analysis found a similar increase in risk of 12 percent for onset of risky alcohol use in 100,602 people from 9 countries. Individual participant data from 18 prospective studies showed that those who worked 49-54 hours and 55 hours per week or more were found to have an increased risk of 13 percent and 12 percent respectively of risky alcohol consumption compared with those who worked 35-40 hours per week.

The findings also provide support for the recommended 48 hours per week as enforced by the EUWT. Alcohol is the most commonly used addictive substance in the U.S. 17.6 million people, or one in every 12 adults, suffer from alcohol abuse or dependence, along with several million more who engage in risky drinking patterns that could lead to alcohol problems. While in developing countries people work extremely long hours, often 12 hours a day, six days a week, because they don’t have a choice, those in developed countries often work more than 50 hours a week to stay atop and make themselves eligible for promotions. In reality, working more doesn’t necessarily get you farther. For instance, a Stanford study found that working 60 hours a week makes you less productive than a typical 40 hours week.

“The workplace is an important setting for the prevention of alcohol misuse, because more than half of the adult population are employed,” write the team of researchers. “Further research is needed to assess whether preventive interventions against risky alcohol use could benefit from information on working hours.”

The findings were reported in The British Medical Journal.