Some birds play tunes not all that different from jazz musicians

Humans were by no means the first to evolve musicality.

Perching birds are like nature’s choir, raising their voice to the tune of life, along with the clicks of crickets, the howl of wolves, the choirs of fish. But there’s more to a bird’s chirps and whistles than meets the eye. Some species of birds push the envelope and literally act musically. For instance, the pied butcherbird’s tuneful behaviour rivals that of professional human musicians, a new paper concludes.

Studying the musical nature of birds required serious interdisciplinary collaboration between biologists, neuroscientists, musicians, and engineers. Among the researchers were David Rothenberg, distinguished professor of philosophy and music in New Jersey Institute of Technology’s Department of Humanities, Eathan Janney, a Ph.D. candidate in the Department of Psychology at City University of New York (CUNY)’s Hunter College.

“Science and music may have different criteria for truth, but sometimes their insights need to be put together to make sense of the beautiful performances we find in nature,” said Rothenberg who also plays the clarinet and saxophone. He is the author of Thousand Mile Song, a book about making music with whales, and Bug Music, How Insects Gave Us Rhythm and Noise whose premise is that listening to cicadas, as well as other humming, clicking and thrumming insects, fostered an innate sense of musical rhythm and synchronization over the long history of human evolution.

Not too long ago, the idea that some bird songs are actually based on musical principles would’ve put many in a quandary. The extensive analysis of the pied butcherbird, however, suggests that this sort of skepticism is no longer warranted.

Hours of recorded audio and statistical analysis suggest that these highly musical birds “balance their performance to keep it in a sweet spot between boredom and confusion,” according to co-author Ofer Tchernichovski, professor in the Hunter College Department of Psychology,

According to the researchers, the more complex a bird’s repertoire, the better it is at singing in time, rhythmically interacting with other birds more skillfully than those birds who only knew a few songs. The most skillful birds extensively play around with their tunes, balancing repetition and variation. It’s not all that different from a jazz musician, said Constance Scharff, a co-author who directs the animal behavior laboratory at the Freie Universität Berlin.

“We found that different phrase types often share motifs (notes or stereotyped groups of notes). These shared motifs reappeared in strikingly regular temporal intervals across different phrase types, over hundreds of phrases produced without interruption by each bird. We developed a statistical estimate to quantify the degree to which phrase transition structure is optimized for maximizing the regularity of shared motifs. We found that transition probabilities between phrase types tend to maximize regularity in the repetition of shared motifs, but only in birds of high repertoire complexity,” the researchers wrote.

In the video below, you can hear a glimpse of the butcherbird’s musical virtuosity. The sample includes a butcherbird solo, a song of another butcherbird as well as one from an Australian magpie. 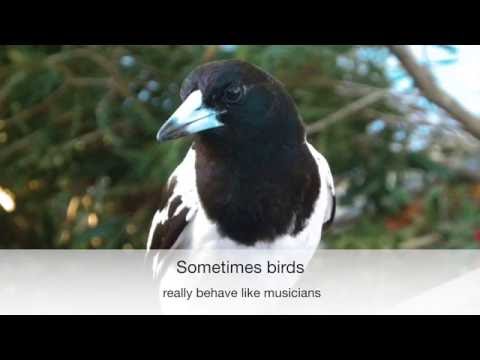 The origin of human music is difficult to pinpoint. Why do humans make music? Why do we like it so much? Why do we like it the way we like it? These are serious questions to which we don’t know the answers fully. By all accounts, though, humans aren’ the only musical species. We’re certainly not the first to develop this ability to construct rhythmic patterns of sound.

“Since pied butcherbird songs share so many commonalities with human music,” Taylor said in a statement, “this species could possibly revolutionize the way we think about the core values of music.”