Beetles have shrunk 20% in the past century, likely due to climate change

This study is the first evidence of this phenomenon in nature.

Beetles in western Canada are getting smaller as the average temperature increases. A professor at the University of British Columbia, Michelle Tseng, involved her undergraduate students in a data-intensive project to see how beetles over the past century have changed in relation to climate. They dug into the scientific literature, and most invaluably, the university’s extensive beetle collection. Both the literature and natural data agree that beetles, particularly large ones, have been shrinking recently. 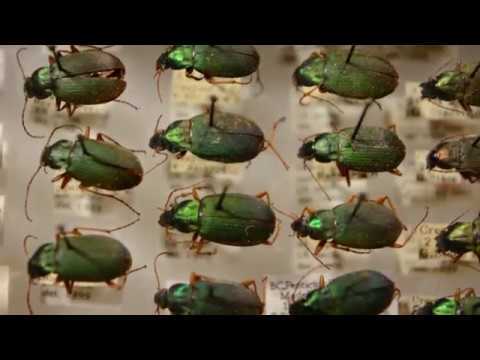 Michelle Tseng and her students dove into the scientific literature first. They looked at published laboratory studies on the temperature effects on insects. It turns out that 19 of 22 beetle species shrank when raised in warmer temperatures. Ground beetles shrunk 1% for every 1 °C increase in temperature.

Next, the researchers turned more locally. UBC’s Beaty Biodiversity Museum collection contains thousands of beetles that have been collected since 1910. The students took pictures of more than 6,500 beetles from eight different species that hail from the Okanagan and the Lower Mainland. The students measured the length of the beetles’ hard wing cover, the elytra, and compared it with climate information over the past 40 and 100 years. The temperature in the Lower Mainland has increased by 1.6 °C (2.9 °F) and the Okanagan has increased by 2.25 °C (4 °F) in fall temperatures over the past 45 years.

Five of the eight species studied have gotten smaller over the past 100 years. The largest beetles shrunk over a 45-year time span, while smaller beetles stayed more or less the same size. The difference was striking, the largest beetles shrunk by 20%. It may not seem like such a big deal if beetles or other animals get a bit smaller. However, they could have larger effects on their ecosystem such by provider fewer services due to their smaller size. For example, some species of beetles may eat fewer weeds if they are smaller.

This study shows that climate change can actually affect the size of organism. Animals are expected to respond to climate change in three possible ways– moving to different areas, changing their life stage timing, or getting smaller. This study is the first evidence of organisms found in nature.getting smaller in response to climate change. The lion’s share of the evidence so far comes from strictly regulated laboratory studies. The drawback of using collected specimens is that compared their size to climate is correlation. The comparison may ignore other factors that had an effect on size such as habitat, food, or predators. It’s hard to say for sure that temperature is the main culprit. However, since the controlled laboratory studies and more natural results agree, the case presented here is nonetheless pretty strong.