Water pollution is a big issue, and so far there isn't one single system capable of reliably filtering toxic heavy metals. These are either too small, or selectively filter certain metals when polluted water often contains a mix. Researchers at ETH Zurich claim they've hit a breakthrough. Using cheap, readily available materials they designed a filter that can retain over 99% concentration of mercury, gold cyanide or toxic potassium, to name a few. It can also absorb radioactive waste and help recycle gold.

by Tibi Puiu
in Chemistry, News, Pollution
Reading Time: 3 mins read
A A
Share on FacebookShare on TwitterSubmit to Reddit

Water pollution is a big issue, and so far there isn’t one single system capable of reliably filtering toxic heavy metals. These are either too small, or selectively filter certain metals when polluted water often contains a mix. Researchers at ETH Zurich claim they’ve hit a breakthrough. Using cheap, readily available materials they designed a filter that can retain over 99% concentration of mercury, gold cyanide or toxic potassium, to name a few. It can also absorb radioactive waste and help recycle gold.

In November, ZME Science reported about one of the worst environmental disaster in history. Then, two dams at a Brazilian iron mine collapsed killing two dozen people, and spewing 60 million cubic meters of mining waste into the Rio Doce and, eventually, the Atlantic Ocean some days later. A quarter million people were deprived of clean, drinking water.

Events such as these serve as a stark warning: environmental disasters have far reaching consequences and should be prevented. When they do happen, however, we should also be prepared. It goes without saying that Brazil wasn’t equipped to handle such a situation, but few governments are. 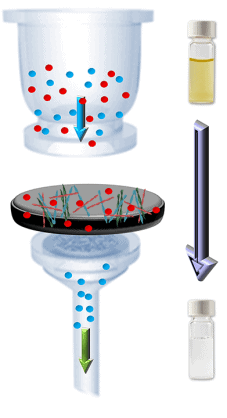 The contaminated water (coloured water in vials) is drawn through the hybrid membrane by negative pressure; the heavy metal ions (red spheres) bind to the protein fibres in the process. The filtered water is of drinking quality. (Graphics: Bolisetty & Mezzenga, Nature Nanotechnology, 2016)

Mitigating water contamination thus sounds like a priority, and the findings at ETH are most welcomed. Raffaele Mezzenga, Professor of Food and Soft Materials at ETH Zurich, and colleague Sreenath Bolisetty devised a hybrid membrane made out of activated charcoal and tough, rigid whey protein fibres. The whey proteins were first turned into amyloid fibrils, so these could stretch easily. Then both materials were applied on a cellulose filter substrate. The mix consists of 2% whey proteins and 98% activated charcol.

Together, the mix traps heavy metals in a non-specific way, including  lead, mercury, gold and palladium. Moreover, it  absorbs radioactive substances, such as uranium or phosphorus-32 — commonly found in nuclear waste, but also byproducts of cancer treatment. One popular mining technique involves treating mining ore with cyanide to extract precious metals. The ETH filter absorbs cyanide from contaminated water. Gold cyanide compounds are also used in the electronics industry to make conductive tracks on circuits. The industry can use this filter to recover and recycle the gold used in the circuit baths. “The profit generated by the recovered gold is more than 200 times the cost of the hybrid membrane,” says Mezzenga.

The setup is very simple: the hybrid membrane, a collection container and a vacuum pump. “A sufficiently strong vacuum could be produced with a simple hand pump,” says Mezzenga, “which would allow the system to be operated without electricity.”

Mezzenga says that the system is infinitely scalable. A filter the size of a truck should work just as well as one the size of a bottle cap.

Tests so far have been very promising. When mercury chloride was added, the concentration in the filtrate fell by 99.5%; 99.98% for potassium gold cyanide; 99.97% for lead salts; 99.4% for radioactive uranium.

“We achieved these high values in just a single pass,” emphasises Bolisetty, co-author of the invention. But even after multiple passes, the filter still proved useful.  The mercury concentration in the filtrate increased by a factor of 10 from 0.4 ppm (parts per millions) to 4.2 ppm after 10 passes. The filter can easily be replaced.  To filter half a litre of contaminated water, the researchers used a membrane weighing just a 10th of a gram, of which seven percent by weight was made up of protein fibres. “One kilo of whey protein would be enough to purify 90’000 litres of water, more than the amount of water needed in a human life time,” says the ETH professor.

The findings were presented in the journal Nature Nanotechnology.