They may not take up surfing or start drinking or just being weird around cupcakes, but chimpanzees go through mid life crisis too – just like humans. 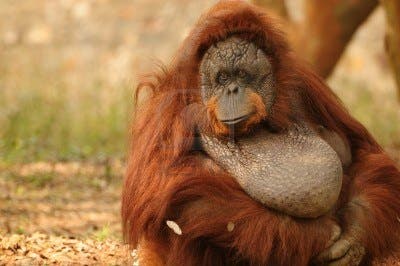 A survey of 508 great apes in captivity published today shows that the animals just get the blues from the late 20s to mid 30s, and their sense of well being just plummets – just before rebounding in older age. The finding that the mid-life crisis isn’t restricted to humans suggests that it isn’t a biological event, but rather a sociological one.

It is quite common for men and women, regardless of status, health and wealth, to experience a dip in happiness from the mid-30s to mid 50s. Researchers have pinned this to socio-economical factors, such as the failure to realize unachievable ambitions and the lack of extreme well being.

Alexander Weiss, a psychologist at the University of Edinburgh, UK, ran the survey, analyzing several factors related to their happiness, including the overall mood, how much pleasure they got out of socializing and how successful they were in goals such as obtaining the food they want. The scientists admitted the study is a little biased, as it is antropomorphic, but they justify that it’s pretty easy to subjectively estimate the ape’s happiness – for their caretakers, who spend most of the day with them.

The results were quite suggestive – the happiest members were the younger and elderly ones, with the most dissatisfied being consistently n their 30s. However, from what I could tell from the study, this is only a snapshot, as it didn’t follow the apes throughout the years, so the results may be connected with earlier factors, but they do seem convincing and consistent. But why does this happen?

“Maybe evolution needed us to be at our most dissatisfied in midlife,” says co-author Andrew Oswald, who is based at the University of Warwick, UK. Unhappiness can be a catalyst for change, potentially spurring unhappy adults to act more adaptively, for instance, by seeking out mates.