If things continue to move in this direction, a few decades from now, we will be living in a world with only a handful of tigers: just over 3000 tigers remain in the wild today! But if you think other species have it much better, then, you’d better take a seat. 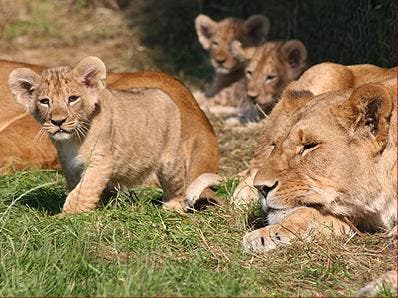 Africa’s lions have lost over 75 percent of their habitat in the past 50 years, and their populations continue to dwindle, mostly due to humans taking over their habitats. Researchers at Duke University, including prominent conservationist Stuart Pimm, warn that lion populations are down to only 32.000 members, and the remaining ones are under extreme pressure.

“Lion numbers have declined precipitously in the last century,” the study, published Tuesday by the journal Biodiversity and Conservation, reads. “Given that many now live in small, isolated populations, this trend will continue. The situation in West Africa is particularly dire, with no large population remaining and lions now absent from many of the region’s national parks.”

50 years ago, there were about 100.000 lions in Africa; now, with their habitat down to one quarter of what it once was, the population follows the same trend – and this is no coincidence. The lions need the habitat, they can’t just crowd up. The percentage of habitat we, as humans, take over, is the percentage of lion population we doom.

“An obvious caveat is that areas for which we detect little conversion of savannahs to croplands may still suffer human impacts that make them unsuitable for lions,” the report said. “Over-hunting for trophies, poaching — of lions and of their prey species — and conflict with pastoralists may not have any visual signal to satellites. Even where there are low human population densities and areas designated as national parks, there (may) not be lions within them.”

Researchers used satellite imagery to estimate the amount of land now available for lions that remains wild and minimally impacted by human growth – but even those are decreasing in size, and if things continue to move in this direction, even they will be gone in 40 years. Hopefully, we will wake up before it’s too late.