Meet Tolley, the single most adorable robot you’ll ever see ever — who’s also a breakthrough

by Alexandru Micu
in News, Robotics, Tech, Videos
A A

University of California San Diego engineers have put together the first soft robot which can navigate rough surfaces such as sand and pebbles. This tiny 3D-printed, four-legged bot can also change its shape to climb over obstacles and crawl through tight spaces.

Led by University of California San Diego mechanical engineering professor Michael Tolley, the team will be presenting their soft robot at the IEEE International Conference on Robotics and Automation from May 29 to June 3 in Singapore.

Hard but with a soft heart

Dylan Drotman, a Ph.D. student at the Jacobs School of Engineering at UC San Diego led the design efforts for the legs and the robot’s control systems. He developed computerized models to predict how the robot would move which he would then compare to the machine’s actual movements in the lab to optimize his design.

The Tolley bot has four legs, each created from a set of three parallel, sealed inflatable chambers (actuators). They’re 3D-printed from a flexible rubber-like material and are hollow on the inside, so they can be inflated. On the outside, the chambers are bellowed, which allows engineers to better control the legs’ movements.

To take a step, all the robot has to do is inflate one chamber and the leg bends. For example, when one chamber is inflated and the other two aren’t, the leg bends opposite the pressurized chamber. Shifting the pressure around allows for movement in any direction. The legs are laid out in the shape of an X and connected to a rigid body, and all work together to navigate the environment.

And oh my god it is ADORABLE. 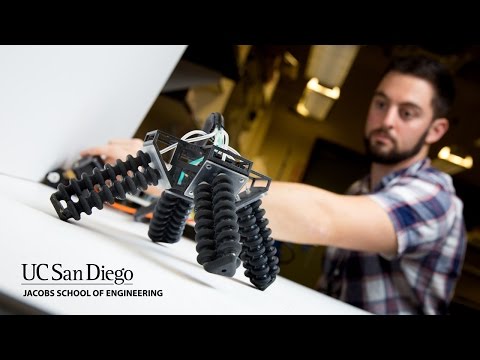 Tolley was built using a high-end printer which allowed the team to print both soft and rigid materials together at the same time, into the same components. This allowed them a whole new level of complexity in designing the robot, particularly its legs, which provide mobility. This blend of soft and rigid materials could form the basis of a new generation of fast, agile bots which would be more adaptable than their counterparts and could safely work side by side with humans, Tolley says.

The process of 3D printing these mixed-material bots is cheaper and faster than alternative production methods, such as mold injection. And the results are way better, too — so far, softbots have only been able to shuffle along or crawl since their structure was too bendy to take their weight, but the team’s mixed-material bot can actually walk. And it can do it on all kinds of surfaces and materials. 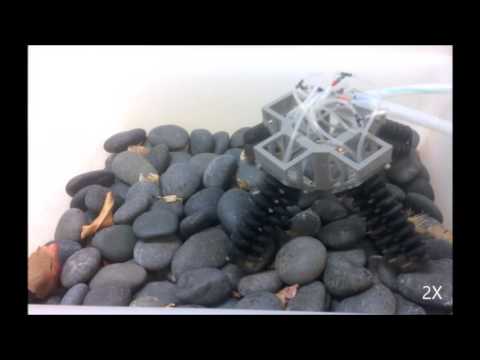 As you can see in the video, the bot has no problem navigating piles of rocks, inclined surfaces, or sand. It’s also able to go from walking to crawling in tight spaces — kind of how your cat wiggles its way through ridiculously small spaces. Researchers successfully tested the tethered robot on large rocks, inclined surfaces, and sand. The robot also was able to transition from walking to crawling into an increasingly confined space, much like a cat wiggling into a crawl space.

Currently, the robot has to be tethered to an open source board and an air pump. The team is now working on scaling down both the board and pump so that the robot can enjoy some freedom and autonomy. The challenge, however, lies in redesigning the board and finding tiny but powerful enough components such as power sources and batteries for the job.