Most powerful stars are actually vampire binary systems. The weaker feeds on the stronger

by Tibi Puiu
in Remote sensing, Space
Reading Time: 3 mins read
A A
Share on FacebookShare on TwitterSubmit to Reddit 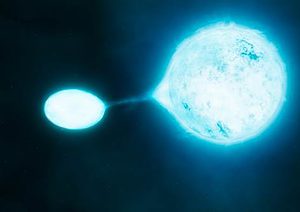 A new research has found that the massively powerful O-type stars, which can be up to 90 times more powerful than our own sun, actually come in pairs most of the time, as a binary system. The two stars wrapper in this dance have a special kind of relationship developed with one another. Thus, one of the stars feeds on the other, sucking gas and fuel from its counterpart like a vampire, or the two eventually end up merging into a single star.

“These stars are absolute behemoths,” says Hugues Sana of the University of Amsterdam.

“They have 15 or more times the mass of our sun and can be up to a million times brighter. These stars are so hot that they shine with a brilliant blue-white light and have surface temperatures over 30,000 degrees Celsius.”

Data gathered from the light  captured by the telescope and  emitted by 71 O-type single stars and members of binaries in six nearby young star clusters in the Milky Way bewildered scientists. According to their findings, 75 percent of all O-type stars exist as part of binary systems, a higher proportion than previously thought.

Type O stars are important for the Universe’s “ecosystem” and represent one of the most powerful classes of stars known in the cosmos. They drive galaxy evolution by hurling heavy elements crucial for life through space via the powerful winds and shocks coming from the stars. Also, they’re associated with with gamma-ray bursts, which are among the most energetic phenomena in the Universe. But these stellar giants can also exhibit extreme behavior, garnering the nickname ” vampire stars ” for the way they suck matter from neighboring companions.

“The life of a star is greatly affected if it exists alongside another star,” says Selma de Mink of the Space Telescope Science Institute.

“If two stars orbit very close to each other they may eventually merge. But even if they don’t, one star will often pull matter off the surface of its neighbour.”

Until now, most astronomers believed that closely-orbiting massive binary stars were rare. This isn’t the case as this recent study found. On the contrary heavyweight double stars are rather common it seems, and their life cycle greatly differs from those of single stars. In the case of vampire stars, the lower-mass star sucks fresh hydrogen from its companion, substantially increasing its mass and enabling it to live much longer than a single star of the same mass would. The victim star, on the other hand, is left with an exposed core that mimics the appearance of a much younger star. This might mislead some scientists in their efforts, the researchers worry.

“The only information astronomers have on distant galaxies is from the light that reaches our telescopes,” says Sana.

“Without making assumptions about what is responsible for this light we cannot draw conclusions about the galaxy, such as how massive or how young it is. This study shows that the frequent assumption that most stars are single can lead to the wrong conclusions.”

Findings were reported in Friday’s issue of the journal Science.