by Tibi Puiu
in Astronomy, Space
Reading Time: 3 mins read
A A
Share on FacebookShare on TwitterSubmit to Reddit 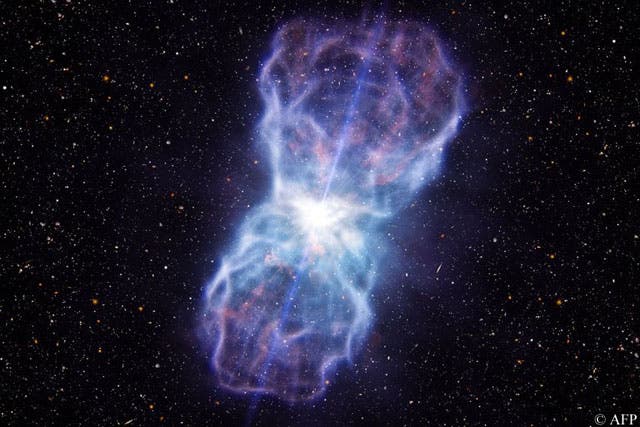 The most powerful explosion in the Universe – a gamma-ray burst–  might have hit Earth during the middle ages. Luckily enough for our ancestors the event had its origin thousands of light years away and its effects went by unnoticed.

Last year, scientists found  unusual levels of radioactive carbon-14 in cedar trees in Japan and spikes of  beryllium-10 in Antarctic ice, signifying that intense amounts of radiations hit the atoms in the upper atmosphere. After dating both tree rings and ice core samples, the researchers were able to pinpoint the spikes at AD 774 and AD 775, however the exact cause of the radioactive event is still open for debate.

German physicists at the Institute of Astrophysics at the University of Jena firmly believe that a gamma-ray burst – the most powerful explosion in the Universe typically triggered when black holes, neutron stars or white dwarfs collide – hit our planet during that time.

“Gamma-ray bursts are very, very explosive and energetic events, and so we considered from the energy what would be the distance given the energy observed,” said Professor Ralph Neuhauser, from the Institute of Astrophysics at the University of Jena.

Now, how come such an event didn’t cause a tremendous amount of hassle? One would expect records of an astonishing event especially from the likes of our superstitious medieval forefathers. The physicists explain that since the gamma-ray burst had its origin so far away from Earth, most of its radiation was absorbed by the ever faithful and protective atmosphere. This made the event unnoticeable, except for same traces that left their mark in isotopes. Had the gamma-ray occurred only a few hundred light years away from Earth, things would have been much different. The massive burst of radiation would have fried the planet’s ozone layer, with devastating consequences for life on the planet.

The findings were reported in the  journal Monthly Notices of the Royal Astronomical Society.

Not all scientists agree that a gamma-ray event triggered the event. Another team of physicists, this time from the US, believe that an unusual massive solar flare could have caused the intense spike in isotopes. The American astronomers awknoledge the possibility of a gamma-ray burst, however keeping mind that such events are extremely rare, occurring at most every 10,000 years per galaxy, and at the least every million years per galaxy. Their take was described in a recent paper published in Nature.

“A solar proton event and a short gamma-ray burst are both possible explanations, but based on the rates that we know about in the Universe, the gamma-ray burst explanation is about 10,000 times less likely to be true in that time period,” Professor Adrian Melott from the University of Kansas.