Bulgarian archaeologists have unearthed centuries-old skeletons treated for vampirism: pinned through their chests with iron rods, a practice thought to keep vampires away. 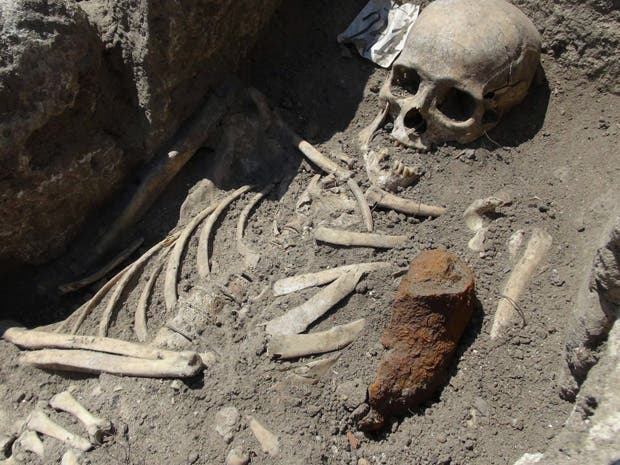 If you thought vampires are only creatures of legend, only to be found in myths, folklore and Hollywood movies, then you might disagree with medieval Bulgarians (and not only). Many European countries, especially eastern ones, believe in undead creatures such as vampires – and keeping them at bay was quite a job.

‘These two skeletons stabbed with rods illustrate a practice which was common in some Bulgarian villages up until the first decade of the 20th century.’, said Bulgaria’s national history museum chief Bozhidar Dimitrov.

According to medieval beliefs, people who were really bad during their lives, or whose remains were found to be very well conserved after they died were candidates for becoming vampires – and people from the Middle Ages were really afraid of vampires. Pagan practices to prevent such transformations varied, and most were quite gruesome: including pinning a rod through their chests, decapitating them after death, etc.

But such sites aren’t quite as unusual, as they have been found all over Russia, Ukraine, Bulgaria, and even western countries. According to Dimitrov, in Bulgaria alone there have been found over 100 such skeletons.

“I do not know why an ordinary discovery like that [has] became so popular. Perhaps because of the mysteriousness of the word “vampire,” he said.

Last month, Italian researchers discovered what they believed to be the remains of a female ‘vampire’ in Venice – buried with a brick jammed between her jaws to prevent her feeding on victims of a plague which swept the city in the 16th century.

The most well known vampire is without a doubt count Dracula; however, few people know that count Dracula was, in fact, a king from Romania (Transylvania) – Vlad Dracul. Though Bram Stoker chose him for his Dracula novel due to some legends of his blood thirst, he was loved by his people and known as a fair king – to the lawful people. With the thieves and criminals, he was as cruel as they get – he had a habit of impaling them, and did the same thing with his enemies.