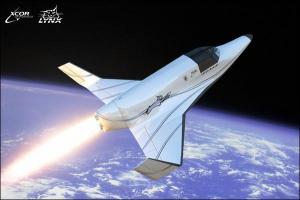 Recently, a small Aerospace company located in California has announced a new type of sub-orbital spaceship that can make your dream come true; that is, if you’ve got the right amount of money and you want to travel into outer space. This spaceship is claimed to provideaffordable front-seat rides to the edge of space for the millions of people who want to buy a ticket.

The company, XCOR Aerospace, announced that it will be able to carry people or payloads to where they will experience weightlessness and see the stars above and the Earth and its atmosphere below. They company hopes that in this way it will “launch” itself into the already rising industry of space travel. Also, it’s supposed to be really not that expensive.

“The Lynx will offer affordable access to space for individuals, researchers and educators,” said XCOR CEO Jeff Greason. “Future versions of Lynx will offer ever-improving capabilities for scientific and engineering research and commercial applications. The spaceship, roughly the size of a small private airplane, will first take off in 2010 and will be capable of flying several times each day. We have designed this vehicle to operate much like a commercial aircraft. Its liquid fuel engines will provide the enhanced safety, durability, reliability and maintainability that keep operating costs low. These engines will also minimize the impact of these flights on the environment. They are fully reusable, burn cleanly, and release fewer particulates than solid fuel or hybrid rocket motors.”

They’ve been developing this technology for 9 years and it seems their work is close to paying off; the Lynx promises to bring the best ride on the face of the planet, in a metaphorical way of course. A price hasn’t been yet officially announced, so we’re quite eager to see what it will be. Also, they’re in the business of developing and producing safe, reliable and reusable rocket engines, rocket propulsion systems, and rocket powered vehicles.