Satellite reveals huge solar filament blazing out from the Sun

Last week, the Sun ejected a huge solar filament - a gigantic burst of hot plasma - and a satellite was just in the right place to capture the whole thing on tape.

by Dragos Mitrica
in News, Remote sensing, Space
A A

Last week, the Sun ejected a huge solar filament – a gigantic burst of hot plasma – and a satellite was just in the right place to capture the whole thing on tape.

The Sun sometimes releases large, bright gaseous features, often in a loop shape. When a prominence is viewed from a different perspective so that it is against the sun instead of against space, it appears darker than the surrounding background. This formation is instead called a solar filament. In other words, solar filaments are unstable strands of plasma pushed out of the Sun by strong magnetic fields; and they can get really big, as you can see below: 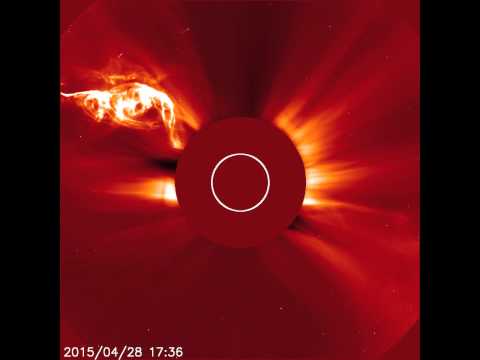 This one in particular was so big, that NASA said it extended “almost half the sun’s visible hemisphere.” The eruption took place on April 28, but NASA released images and video of the event yesterday, on May 4. The Solar and Heliospheric Observatory (SOHO) satellite, a joint NASA and European Space Agency project, had a front-row seat for the action.

The image was captured by the Large Angle Spectrometric Coronagraph aboard SOHO. The block-color anulus is used to block the intense light at the surface of the Sun, allowing the image to be captured in more detail.

“To put this in perspective, the diameter of the images is 45 million kilometers (about 30 million miles) at the distance of the Sun, or half of the diameter of the orbit of Mercury. The white circle in the center of the round disk represents the size of the sun, which is being blocked by the telescope in order to see the fainter material around it,” NASA said in a press release.