by Tibi Puiu
in Discoveries, Remote sensing, Space
Reading Time: 2 mins read
A A
Share on FacebookShare on TwitterSubmit to Reddit 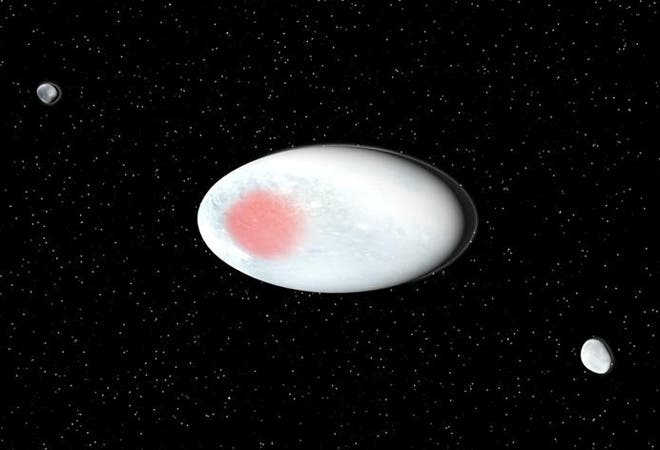 Discovered deep in the farthest reaches of our solar system, Haumea is a tiny dwarf planet which has been fascinating scientists for years now since its discovery in 2004, not only because of its peculiar rugby-ball shaped form, but also because of its surface structure.

According to the European Southern Observatory, 75 per cent of its surface is covered with a reflective surface of water ice, but not just any ice – fresh, highly organized crystals instead of old, amorphous glass-like ice.

Since solar radiation constantly destroys the crystalline structure of ice on the surface, energy sources are required to keep it organised,’ said Benoit Carry, co-author of the study and a researcher at the ESAC Centre of the European Space Agency in Madrid.

‘The two that we have taken into consideration are that able to generate radiogenic elements (potassium-40, thorium-232 and uranium-238) from the inside, and the tidal forces between Haumea and its satellites (as seen between the Earth and the Moon)’ he told Spanish outlet SINC.

The finding was made using data captured by the Very Large Telescope in Chile, which Carry and other astronomers used and calculated that its surface ice is constantly replenished through heat/refreeze process that basically puts Maumea’s in a perpetual cycle of icy renewal.

Haumea is one-tenth the size of Earth and about 43 times farther from the sun, located beyond Pluto in the Kuiper belt. Remarkably, the dwarf planet named after the Hawaiian deity of fertility and childbirth has a rotation speed of less than four hours, one of the fastest in our solar system.

Its satellites Hi’iaka and Namaka, both also covered in ice and named after the goddess Haumea’s daughters, may have been formed by another object crashing into Haumea, with the same theoretical collision potentially responsible for the dwarf planet’s unusual shape.