“The Rosetta team” is euronews’ person/people of the year

by Mihai Andrei
in News, Space
A A 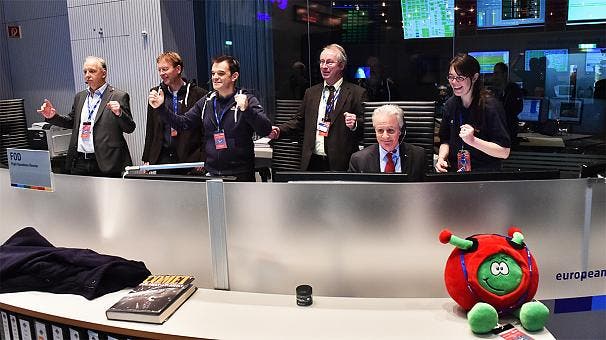 It’s almost always politician, economists or humanitarians that take the laurels – and for good reason. The list should feature those who have done the most good to humanity, so it should be people in a position to do so. But this time, Euronews acknowledge the impact that scientific discoveries have in today’s society.

“The Rosetta team’s tireless work enabled this major milestone in the history of the European Space Agency, and of space exploration. But there is more to it: not only is Rosetta the science story of the year, but the mission also successfully captured our imagination. For a moment, mankind gazed at the stars, looking to glimpse at our past, and hopefully, at our future. We have the men and women of the Rosetta team to thank for that”, the news channel writes.

Rosetta a mission launched by the European Space Agency to perform a study of the comet 67P/Churyumov–Gerasimenko (67P). It became the first probe to orbit a comet, as well as the first probe to land on a comet (its lander Philae did). The information Rosetta provided is invaluable – it provided the most detailed topography map of a comet, the first color image of a comet, it found that a comet “sings”, stinks, and has organic molecules. It also found that water on Earth likely doesn’t come from comets, as was previously suggested, and many other things.

Despite some issues and even some failures, the mission was a complete success, which captured our interest and sparked our interest in space exploration in a way that hasn’t been done since Curiosity landed on Mars. Even though manned missions aren’t really the priority now, space exploration is still taking place, and the results are spectacular – as the Rosetta team clearly showed. The award they got is more than deserved.

The lander Philae is currently shut down due to lack of energy, but will resume its activities when the comet turns its other side towards the Sun, charging the lander’s batteries. The American Geophysical Union metting which is taking place now is having a field day discussing the accomplishments of the Rosetta mission.

The euronews person of the year is selected from a list of people, or groups of people, that had a significant impact, either positive or negative, on the year. The 2014 shortlist was composed of Russian President Vladimir Putin, the Rosetta team, ISIL leader Abu Bakr al-Baghdadi, Sakharov Prize winner Denis Mukwege and Pope Francis.