by Mihai Andrei
in Space, Space flight
Reading Time: 3 mins read
A A
Share on FacebookShare on TwitterSubmit to Reddit

Astrobotic Technology Inc., a spin-off company of Carnegie Mellon University (CMU) announced a full-sized prototype called the Polaris lunar rover – a rover designed specifically to work in the dark side of the Moon, home of the permanently shadowed craters of the lunar poles. 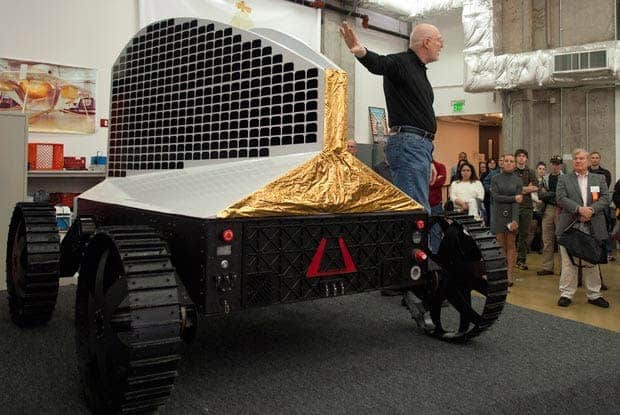 The idea is to launch the rover using one of the Falcon rockets built by SpaceX and win the Google Lunar X $20 million prize in the process. Polaris is designed to work in the low-light conditions specific to the poles, and it will carry a drill which will bore a 1 meter hole in the surface of the Moon. In order to win this prize, they must send the robot successfully to the Moon, where it has to also send back video footage of the work it does there.

The point of the mission, as far fetched as it sounds, is to search for ice deposits which can be used by future colonists. Scientists have been working around the idea of an outpost on the Moon, but so far, with little to no progress; one of the obstacles was always finding the necessary water. Shipping water fro the Earth would have huge costs, and so the only economically viable solution would be to find water on the Moon. If a sufficient amount could be found, future colonists could eventually grow crops, generate air and even biofuels for their own and other, visiting ships.

Observations done by NASA and Indian spacecraft suggest a substantial amount of water should exist at the poles, but the terrain is very rugged, and given how most rovers run on solar power, problems start rising – but where there’s a will, there’s a way.

“It is the first rover developed specifically for drilling lunar ice,” William “Red” Whittaker, Astrobotic CEO and founder of the Field Robotics Center at CMU’s Robotics Institute, told Szondy. Whittaker says that Polaris is an amalgamation of the other robots built at the center to study drilling on the Moon. “What Polaris does is bring those many ideas together into a rover configuration that is capable of going to the moon to find ice.”

Unlike the Curiosity rover, which is nuclear powered, Polaris will be solar powered, solar powered, but in order to do its job in the dark environment, the solar arrays on Polaris need to be very large and vertically arranged to catch enough light to generate 250 watts of power. Still, one can only ask if the solution adopted for Mars, nuclear power, wouldn’t work better here.

Astrobotic has won nine lunar contracts from NASA worth $3.6 million, including one to evaluate how Polaris can accommodate NASA’s ice-prospecting instruments during a three-mile traverse near the moon’s north pole.