by Tibi Puiu
in Remote sensing, Videos
Reading Time: 2 mins read
A A
Share on FacebookShare on TwitterSubmit to Reddit 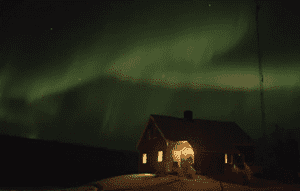 Most of the aurora borealis videos we’ve featured on ZME Science, besides the fact they’re absolutely gorgeous, are time lapsed. Because of this, I’ve always thought the beautiful, wobbly dance of the Northern Lights is actually a tad slower, maybe not even perceivable. Photographer Alistair Chapman went all the way to Tromso, Norway for last week’s aurora borealis show as a result of the recent solar bursts that hit the Earth, and caught on tape one of the greatest footage I’ve seen, and all in real time. Turns out the light show is just as amazing How I envy your northern folk, big eyes and all.

The video quality isn’t that much, but Chapman promises to upload a higher-quality version when he returns home Feb. 2. The sun is currently approaching the peak of its 11 year cycle, set for 2013, during which solar bursts will be of much greater power and occur more often.

Cheers to Phil Plait of Bad Astronomy for this great piece.