Something as simple as a snowflake melting can be very difficult to understand.

For the first time, researchers have created a 3D numerical model of melting snowflakes in the atmosphere. Aside from just painting a pretty, scientifically accurate picture, this could also help scientists develop better weather models and predictions.

If there’s anything this winter has taught us, it’s that weather is still surprising. Weather predictions have come a long way, but the sheer complexity of all the elements involved makes it very difficult to create accurate models — one of those elements which adds complexity is snow.

Snow not only affects weather predictions, but it also affects remote sensing. For instance, a radar “profile” of the atmosphere will typically show a very bright layer at the altitude where falling snow and hail melt — much brighter than atmospheric layers above and below it. We don’t really know why this happens, and we don’t understand many things about how snow starts to melt high up in the atmosphere. This is where NASA’s Jussi Leinonen enters the stage.

Leinonen created a melting model for snowflakes. He started his model by observing snowflakes in nature and noting the different melting stages. First, the outer parts start to melt, creating a bit of liquid water. This meltwater gathers in any concave regions it can find, and then the different droplets merge to form a liquid shell around the ice core. Ultimately, this melted core develops into a water drops, as can be seen above.

Although snowflakes notoriously have different intricate forms, the process seems to carry out similarly, regardless of what the shape might be.

While this isn’t the first model of snow melting, it’s by far the most accurate. This improvement could lead to significant improvements in several fields of research. Taking into consideration the individual dynamics of individual snowflakes can help researchers better understand the cryosphere — the collection of the Earth’s ice sheets, glaciers, sea ice, snow cover, and permafrost.

In 2018, NASA will launch two new satellite missions, conducting an array of field research that will enhance our understanding of the Earth’s cryosphere. 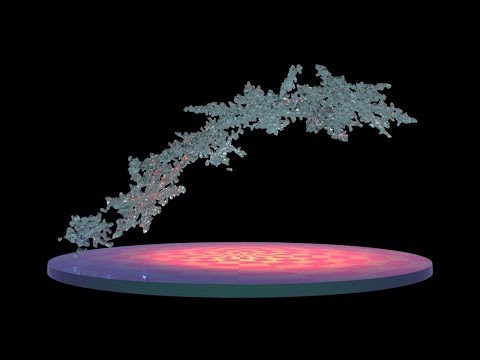