Dwarf planet Eris, which led to Pluto’s demise as a planet, may bring back it’s status

Eris is a dwarf planet, observed in 2005 for the first time, whose discovery led to Pluto losing its planet status, even though a new moon was found orbiting it; recently, Eris passed in front of a planet, giving astrophysicists a clear view for the first time. 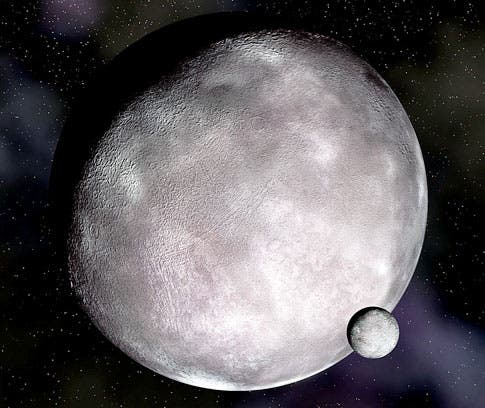 Until now, the general scientific idea regarding it was pretty fuzzy; they believed it was about 25% larger than Pluto, but nobody was able to say for sure, because the distance between it and Earth was about three times bigger than between Pluto and the Sun.

“It’s very difficult, because it’s so small in the sky,” said lead author Bruno Sicardy, a planetary scientist at Pierre and Marie Curie University and Observatory in Paris.

When trying to measure the size of such objects, located outside our solar system, they wait for what is called a stellar occultation – the moment in which the object passes in front of a star, and basically casts a shadow over the Earth. From the data, scientists estimated the size of the radius to be about 1,445 miles – about as big as Pluto, which as a diameter of approximately 1,429 miles.

The fact that it is significantly smaller than previously believed might not seem significant at first, but what it means is that the amount of light scientists had detected coming from it originated from a smaller area than calculated, and so the planet is much brighter than believed at first. As a matter of fact, this would make Eris one of the brightest objects in the solar system even though its surface should have been darkened from bombardment by cosmic rays and micrometeorites. How can this be?

The authors suggest that this might happen because of a really thin layer of methane-and-nitrogen frost, no bigger than a few milimeters, which clothes the surface of the planet. This frost, they say, was probably once an atmosphere 10,000 times thinner than Pluto’s that froze onto the surface in the frigid temperatures as Eris traveled away from the sun on its 557-year orbit.

The thing is, Pluto’s size is not precisely known, but since Eris might be much smaller than previously believed, the subject of Pluto being a planet might be brought back to the table.

Still, regardless of size, Eris is about 27% heavier than Pluto. This means it must contain relatively more rock and less ice.

“We really think [Eris and Pluto] should have been made at the same time out of the same materials — so really, it’s bizarre that they’re so different,” Brown said.