by Mihai Andrei
in Astrophysics, Space
Reading Time: 1 min read
A A
Share on FacebookShare on TwitterSubmit to Reddit

This is definitely something you don’t see every day: NASA captured a video of a binary star system exploding into space – yeah, actual footage! 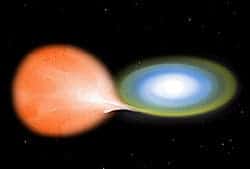 This shouldn’t be confused with a supernova – which is a star collapsing in on itself, self destructing in a cosmic BANG. A nova is a cataclysmic nuclear explosion in a star caused by the accretion (gradual gravitational growth by addition) of hydrogen on to the surface of a white dwarf star, which ignites and starts nuclear fusion. Basically, a white dwarf can only hold so much hydrogen before it reaches critical mass and explodes, ejecting all the surplus mass into outer space.

To make things even juicier, the white dwarf then continues to suck hydrogen, and when the accretion reaches critical mass, the process repeats, which means NASA will continue to keep their eyes on this particular juicy spot.

The video was captured by NASA’s STEREO-B spacecraft as it kept its camera on that region of space from April 20 to 24, 2012.

Via @Sungrazercomets. Picture via Wikipedia