Humanity has long dreamed of a mission to Mars, but the boots which would take the first steps on the Red Planet could be stomping on all Martian life. 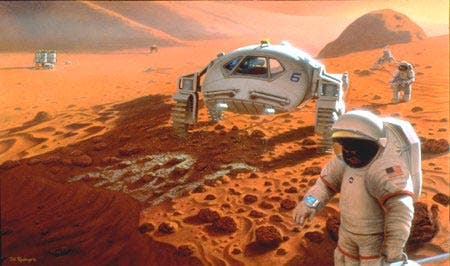 Despite any decontamination process, a swarm of 100 trillion microbes will accompany every astronaut who lands on Mars – as a part of their system. This microbiome provides a number of services to humans, including digestion help and keeping unwanted pathogens at bay – these microbes are a part of you, basically. While they do all sort of good stuff for us, they have the potential to destroy any life on Mars, if any life exists.

“We have the responsibility to Mars, I think — even if it’s just Martian microbes — not to kill them by the act of detecting them,” Cynthia Phillips of the SETI (Search for Extraterrestrial Intelligence) Institute said at the SETICon 2 meeting in June in Santa Clara, Calif.

This problem is impossible to go around.

“If you have human astronauts there,” Phillips added, “there’s no way to sterilize them. They’re spewing out thousands of microbes every second. So it’s a real problem.”

Even though the possibilities for such a mission are decades away, space agencies have already toyed with ways to minimize the contamination risks posed by a potential Mars manned mission, and in fact, they have set a rough protocol in 2008. The Committee on Space Research (COSPAR) advise steering clear of any speciel areas life might proliferate, such as gullies and possible geothermal sites.

“It is understood that when humans go to Mars, there will be a release of microbes from the human habitats and from the humans themselves, and also that humans will inevitably be exposed to Mars materials,” said Cassie Conley, NASA’s planetary protection officer.

This is a risk we have to truly ponder if we intend to send humans to Mars.