The Lyrid Meteor Shower – not to be missed this weekend

A moonless night might offer the best setting for the best view of the upcoming Lyrid meteor shower in years this very weekend. The best time to catch it on display will be on Saturday night, although the skyline fireball display is set to rage on well into the following morning.

The Lyrids are somewhat modest in display compared to other meteor showers like the Perseids or the Orionids, but if you’ll be patient enough you’ll be certain to catch some veritable gems.

“Typical hourly rates for the Lyrids can run between 10 and 20 meteors. However, rates as high as a hundred meteors per hour are not uncommon,” said Raminder Singh Samra, a resident astronomer at the H.R. MacMillan Space Centre in Vancouver, Canada.

“On rare occasions there may even be fireballs”—especially bright meteors—”streaking across the sky, too, making it quite a spectacular sight for observers.”

Meteor showers occur when the Earth passes through the trail of dust left behind by a comet; these particles, most no bigger than grains of sand, get caught in the atmosphere and ignite, creating the wonderful spectacle watched by sky gazers all over the world. The Lyrids are thought to originate from comet Thatcher, whose 416-year orbit is nearly perpendicular to the plane of the solar system.

“Like clockwork every year in April, the Earth passes through the particle stream of this long-periodic comet, which last approached the sun in 1861,” Samra said.

“These particles hit our atmosphere while traveling at high speeds and burn up, leaving behind streaks of light”—what we see as meteors.

Look towards the meteor shower’s namesake constellation, Lyra, near the bright star known as Vega for the best chance of gazing shooting stars. As always, if you happen to shoot some footage of event, please feel free to send some over to andrei@zmescience.com – hopefully, we’ll be able to gain enough to publish a photo post, where each individual author will be credited accordingly.

Here’s a video about the Lyrid meteor shower and the April sky. 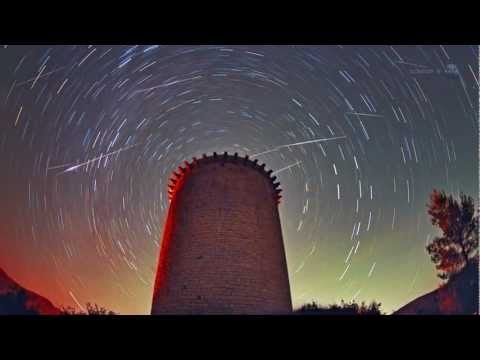