The shuttle is back in space, it’s made out of LEGO though [VIDEO]

by Tibi Puiu
in Space, Videos
A A

A lot of people were left disheartened when the iconic space shuttle program was canceled last year. Though it’s now been turned into a museum exhibit, the shuttle has remained in the minds and hearts of millions as a symbol of man’s journey towards the stars. Romanian Raul Oaida made his own tribute, and put a LEGO model shuttle into space via a weather balloon, to an altitude of 35,000 m. The whole event was documented in a youtube video, posted right below.

The Lego shuttle was strapped to a 1,600g meteo balloon filled with helium, along with a  GoPro Hero camera, which recorded its ascent, and a Spot GPS  to track its movement. The whole rig was only $1000, a trifle of the price tag such an event would’ve cost ten years ago, showing just how technology has evolved and allowed anyone passionate enough to accomplish amazing things. The LEGO shuttle eventually landed about 240 kilometers away from the original launch site, as detailed by Raul on his blog.

A similar feat was accomplished by a Canadian teen duo at the beginning of the year when they put the LEGO man, holding Canada’s flag,  24km into the upper atmosphere from where the Earth’s curvature can be seen. A similar helium balloon was used then as well.

The launch took place in Germany, since Romania’s flight clearance procedure was way too bureaucratic. 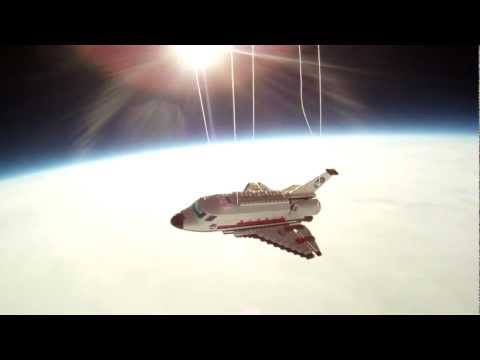