The best view so far of the Jupiter red spot 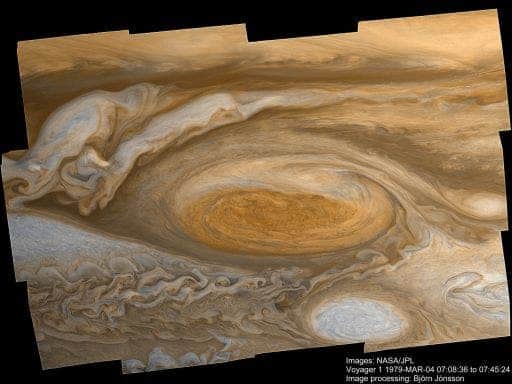 I’ve seen a whole lot of pictures of the red giant spot (it’s about as big as Earth), but this one is by far the best one so far; and it’s been posted by an amateur astronomer, Björn Jónsson, on one of my favorite forums: unmannedspaceflight – lots of great pics and discussions there. Well basically he just processed some pictures taken more than 30 years ago, in 1979.

“This is a 4×3 mosaic of images. The processing is almost identical to the processing described in the first message of this thread so I’m not decribing it further here. One caveat though: There is probably some slight geometric distortion but it shouldn’t be a problem in this case. The images I used were obtained on March 4,1979 at a distance of about 1.85 million km. The first image (C1635314.IMQ) was obtained at 07:08:36 and the last one (C1635400.IMQ) at 07:45:24. The resolution is roughly 18 km/pixel.”, said Mr. Jónsson in his post.

My new mosaic reveals an enormous amount of details, especially in the sharpened version. Some of these details I didn’t know were visible in any images of Jupiter until relatively recently. The sunlight is coming form the east (right) and because the GRS is in the southern hemisphere it’s really coming roughly from the ENE over the GRS and the regions south of it. With this in mind, vertical relief and cloud shadows are clearly visible at many locations around the GRS’ periphery.