by Dragos Mitrica
in Great Pics, Remote sensing, Space
Reading Time: 3 mins read
A A
Share on FacebookShare on TwitterSubmit to Reddit

When we think about Jupiter, we have a certain image in mind – the big red giant with a huge spot on its surface and rings around it. But if you look at it from “below” (from the southern Hemisphere), the planet looks entirely different, as the Cassini probe showed.

“If you were to float just beneath the giant planet and look directly up, you would be greeted with this striking sight: red, bronze and white bands encircling a hazy south pole. The multicoloured concentric layers are broken in places by prominent weather systems such as Jupiter’s famous Great Red Spot, visible towards the upper left, chaotic patches of cloud and pale white dots. Many of these lighter patches contain lightning-filled thunderstorms”, the European Space Agency writes.

Jupiter’s axe is not tilted as Earth is, so that means that the planet doesn’t really get a lot of seasonal variation… but that doesn’t mean that the weather is good on Jupiter; on the contrary. It has a thick and tumultuous atmosphere filled with raging storms and chaotic cloud systems. The clouds are not made from water vapor, but dense layers of ammonia, tangled together by Jupiter’s gravity and the hectic wind patterns, creating hurricanes with wind speeds of up to 360 km per hour.

The Red Spot itself is a an anticyclone that has been violently churning for hundreds of years. At one point, it was bigger than Earth, but more recent pictures show that it has currently shrunk significantly. Presumably the persistence of the Great Red Spot is related to the fact that it never comes over land, as in the case of a hurricane on Earth, and that it is driven by Jupiter’s internal heat source.

There is also an accompanying image of the Jupiter’s north pole, taken during the same flyby. 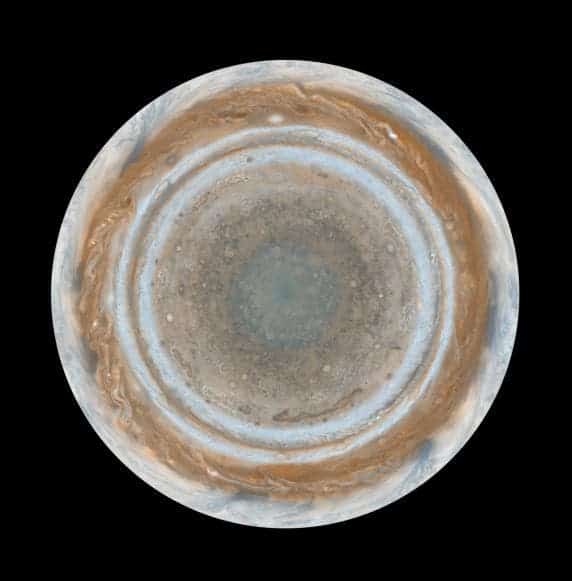 In other recent images Cassini revealed stunning images of Saturn’s rings. Although they might appear solid, the rings are actually made from chunks of rock and ice, varying in size from grains of dust to small mountains. 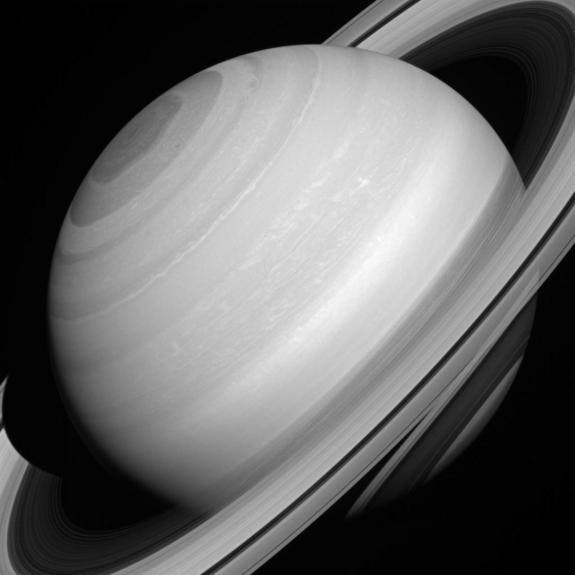 The Cassini-Huygens mission is a cooperative project of NASA, the European Space Agency and the Italian Space Agency. The mission was launched in 1997, and since then, it has captured a huge number of stunning images of Venus, Earth, Jupiter, Saturn and their satellites.ESA’s Juice mission aims to do the same for Jupiter. Planned for launch in 2022, the spacecraft will reach Jupiter in 2030 and begin observing the planet and three of its moons – Ganymede, Callisto and Europa.