Astronaut shows what fidget spinners can do in outer space

NASA just wins, can everyone stop with the fidget spinner videos now?

by Mihai Andrei
in Offbeat, Space, Videos
A A

You thought you’ve seen fidget spinners — but you’ve never seen them like this. 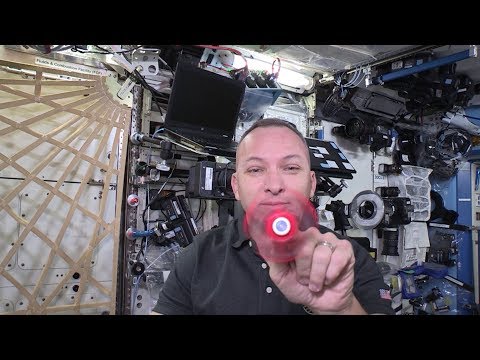 Along with vital supplies and experiment materials, NASA astronauts are also allowed to bring some personal items aboard. Thankfully, someone included a fidget spinner and showed us some tricks (we don’t know for sure who brought it aboard, there’s no official source as to how the fidget spinner got on the ISS).

The fidget, they say, is an excellent way to experiment with Newton’s laws of motion.

The video starts with the astronauts hanging out in front of the Cupola, the ISS observatory module, and quickly moves into Newton’s territory with NASA’s Randy Bresnik doing rotations around his waist and Joseph Acaba doing forward somersaults. But it all gets real when the fidget spinner is brought out.

“A fidget spinner in space! How long does it spin? I’m not sure, but it’s a great way to experiment with Newton’s laws of motion!” Bresnik wrote on Twitter.

“Allowing the fidget spinner to float reduces the bearing friction by permitting the rate of the central ring and outer spinner to equalize, and the whole thing spins as a unit,” he added on the video page.

I’ll just assume Bresnik was the one who brought it aboard since he’s the one who seems most proficient with it. I was never on the fidget hype train, but somehow — seeing the thing spinning and floating at the same time just makes it seem like the coolest thing in the world.

Ok NASA wins. No more fidget spinner videos from here on out. Thanks. ~Sincerely, Everyone.

If you have no idea what we’re talking about, fidget spinners are rather nifty toys consisting of a ball-bearing in the center of a multi-lobed flat structure made from metal or plastic. The idea is that the entire thing spins around its axis with very little effort. Fidget spinners were invented as early as 1993, but they only became a hit recently, after being suggested as tools to help people who have trouble with focusing or fidgeting.