by Mihai Andrei
in Shorties, Space
Reading Time: 1 min read
A A
Share on FacebookShare on TwitterSubmit to Reddit

Expedition 36 crew members Pavel Vinogradov, Chris Cassidy and Alexander Misurkin landed in Kazakhstan at 10:58 p.m. Tuesday (10 Sept) without any problems. Thus, their 5 and a half month mission onboard the ISS has ended. 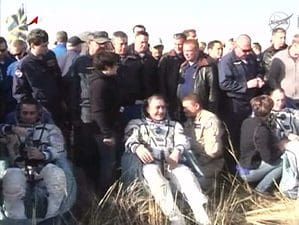 Just the day before, Vinogradov handed over control of the station to Flight Engineer Fyodor Yurchikhin in the traditional Change of Command Ceremony, and urchikhin officially became station commander when the homeward-bound trio undocked.

Meanwhile, back on Earth, future crew members await to take their place: Oleg Kotov, Mike Hopkins and Sergey Ryazanskiy are set for a September 25 launch, also from Kazahstan.